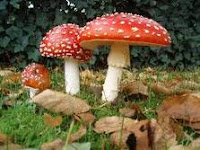 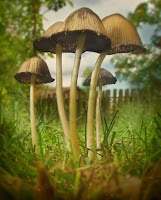 Mushroom, the plant of immortality? That's what ancient Egyptians believed according to the Hieroglyphics of 4600 years ago. The delicious flavour of mushrooms intrigued the pharaohs of Egypt so much that they decreed that mushrooms were food for royalty and that no commoner could ever touch them. This assured themselves the entire supply of mushrooms.

In various other civilizations throughout the world including Russia, China, Greece, Mexico and Latin America, mushroom rituals were practiced. Many believed that mushrooms had properties that could produce super-human strength, help in finding lost objects and lead the soul to the realm of the gods.

For centuries, the sudden and rapid eruption of circles of mushrooms from the soil led people to believe that dark or terrible forces were at work. Lightning strikes, meteorites, shooting stars, earthly vapours, and witches have all been proposed as agents of their origin.

One common theme in all these traditions is the belief that dire consequences await anyone foolhardy enough to enter a fairy ring. Trespassers would be struck blind or lame, or even disappear to become slaves in the fairies' underground realm. In Wales the rings were associated with fertility and doom, and anyone foolish enough to plough one up would incur the wrath of the fairies. It was also widely believed that if animals grazed within a fairy ring their milk would putrefy.

On the positive side, fairy rings were said to bring good luck to houses built in fields where they occur. In another tradition, the rings were sites of buried treasure, but there was a catch, the treasure could only be retrieved with the help of fairies or witches.

Many cultures had other weird and wonderful explanations for the origins of fungi.

In parts of Africa, mushrooms were sometimes regarded as souls of the dead, or as symbols of the human soul.

Between the sixteenth and nineteenth centuries, people in rural areas of central Europe would exhibit strange symptoms from time to time, dementia, facial distortions, hallucinations, convulsions, and paralysis. Cattle would stop producing milk, and other farm animals would also behave strangely. On many occasions these people were persecuted by religious zealots, tried as witches, and subjected to the cruellest of tortures. Thousands were executed in the name of Christianity.

We now know that these people were not possessed by evil spirits, but were exhibiting signs of ergot poisoning, after eating bread made from rye contaminated with the fungus Claviceps purpurea. Most 'bewitchments' took place in the cool, damp river valleys of south western Germany and south eastern France, where conditions were perfect for ergot to thrive and rye was a staple cereal crop.

Nearly 300 years after the notorious witchcraft trials in Salem, Massachusetts of 1692, there is compelling evidence that the accused in this case were also suffering from ergotism. The symptoms were again consistent with poisoning. Damp and rainy weather conditions recorded at the time were also ideal for ergot. The weather the following summer was drier and the bewitchments abruptly ended.

Throughout history, folk healers have employed many medicinal qualities of the fungus kingdom, some real and others imagined.

The antibiotic properties of moulds have been known for countless generations. In the twelfth and thirteenth centuries, the Knights Templar used mould extracts to treat infected wounds. Fungi have also been used in Europe as remedies for boils and abscesses, in gargles to treat throat infections, as laxatives, as contraceptives, and to remove skin blemishes.

The Stinkhorn (Phallus impudicus) has been used in Europe to treat rheumatism, epilepsy, gout, and skin cancer-but it was also blamed for outbreaks of cholera and madness! Puffballs have many uses. Their dried spores were used to staunch the flow of blood from wounds or nosebleeds; smouldering puffballs were once used to transfer fire from place to place; and beekeepers in some places still blow the spores of the giant puffball into hives to narcotize the bees.

Oriental herbalists have been using Reishi mushrooms (Ling Chi or Ling Zhi: Ganoderma lucidum) for some 4,000 years. These mushrooms are claimed to be effective against many ailments, including arthritis, several cancers, heart disease, and hepatitis. In western Africa fungi have been used to treat venereal diseases.

Less likely remedies include the wearing of a Cramp Ball (Daldinia concentrica) in the armpit to protect oneself from cramps. Other fungi have been claimed as aphrodisiacs-the recipe for one such potion calls for boiling a toad with some mushrooms in spring water. Young men in Lapland would carry a fungus (Trametes suaveolens) hanging from their waists when courting. Trametes has an anise-like odour that may work as an attractant, a deodorant, or not at all.

This is one of Ireland's must distinctive mushrooms. It is found throughout the Northern Hemisphere and known for its unpredictable and potent poison. The cap is a bright scarlet colour with white to yellowish warts. The gills and stem are both white. Its favourite habitat is under pine and birch trees.

Its poisonous properties have had a fascination for humans over the centuries. When the Vikings invaded Ireland they are said to have eaten Fly Agaric before battle to make them demonic and behave in a berserk manner. Folklore from the Northern countries often refers to Fly Agaric as a gift from the gods to provide men with fearlessness and strength.

In Walt Dinsey's Fantasia a fairy ring of Fly Agaric shimmers into colour and shapes to the music of Tchailkovsky's Nutcracker Suite. The poison is not deadly, but its effects are unpredictable and it may cause death in some people. Generally though, there is a great variation in its effect.

In medieval times the mushroom was used to stupefy flies. It was added to milk and left around the house in dishes. In fact, in those times it was called the Bug Agaric.

In many cultures it has been used as a gateway to the 'other' world. When fresh it is very poisonous and you must be careful after handling it that it does not get into your system. Fly Agaric is found throughout the Northern Hemisphere and has been used by tribes in these areas during rituals that involve spirits. Even today, it is still used in some tribes in Eastern Siberia. The North American Indians also used it in a similar manner.

In 'civilized' Europe its use has given rise to the 'little people' such as faeries and leprechauns. Lewis Carroll was obviously familiar with its affects. In Alice in Wonderland there is a scene where a caterpillar is sitting on a mushroom (Fly Agaric) smoking a pipe and Alice is in front of him at mushroom height. She nibbles on the mushroom to make herself bigger and smaller. After the publication of Alice in Wonderland images of the Fly Agaric appeared in much Victorian literature. It was also painted on children's toys and cradles.

I shall write more about Fly Agaric in December concerning its association with Santa Claus.
Posted by SilentOwl at 2:24 PM