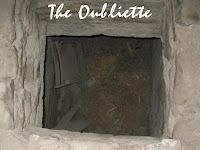 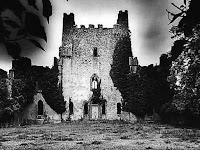 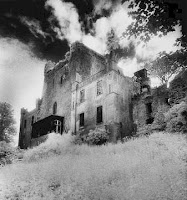 Standing upon a vast throne of solid rock, Leap Castle was once the stronghold of the warlike O’Carroll’s and its eventful history is mostly written in their blood. In the 16th century, O’Carroll of the Leap held a lavish banquet at his family fortress and invited a rural branch of his own sept to partake of his hospitality. No sooner had the unfortunate guests sat down to dinner, than he massacred everyone one of them. Inter-clan bloodshed was a common occurrence and members of the tribe, attended family get togethers or re-unions at their peril! Following the death of Mulrooney O’Carroll in 1532, a bitter dispute over succession arose. As siblings battled each other for leadership of the clan, “one-eyed” Teige O’Carroll is said to have slain his own brother, who was also a priest, as he celebrated Mass in “The Bloody Chapel”.

However, the days of O’Carroll occupancy were drawing to a close, and they were about to lose possession in a suitably blood- thirsty manner. A 17th century daughter of the clan fell in love with an English soldier named Captain Darby, who was being held prisoner in the castle dungeons. She smuggled food to him and eventually engineered his escape. As they were making their way down the staircase, her brother suddenly confronted them, and the captain silenced him with a single sword thrust. Since his lover then became the heiress to Leap Castle, it passed into the ownership of the captain’s family when the two were later married.

The last of the family to own Leap Castle was Jonathan Charles Darby who arrived here on 16th July 1880. In 1909, his wife Mildred wrote an article for the Occult Review describing how she had held several séances at the castle during which she had attracted the unwelcome attentions of an elemental – a primitive and malevolent force that attaches itself to a particular place. Mildred Darby described how she was “standing in the Gallery looking down at the main floor, when I felt somebody put a hand on my shoulder. The thing was the size of a sheep. Thin gaunt and shadowy, its eyes which seemed half decomposed in black cavities stared into mine. The horrible smell, gave me a deadly nausea. It was the smell of a decomposing corpse” Mildred’s occult dabbling also appears to have awoken other malevolent forces within the walls of Leap Castle, and it was at this time that its fearsome reputation became firmly established.

The spirit is thought to be a primitive ghost that attaches itself to a particular place. It is often malevolent, terrifying and unpredictable. The Darby’s remained at Leap until 1922. Being the home of an English family, it became the target of the Irish struggle for independence. Destroyed by bombs and completely looted, nothing but a burned out shell remained. The Darby's were driven out.

Following its destruction by fire in 1922, workmen who had commenced gutting the interior, discovered an oubliette, a small dungeon whose name, derived from the French oublier, meaning “forget”, says it all, behind a wall of the bloody chapel. This room had a drop floor and prisoners were pushed into the room where they fell to their deaths - either impaled on a spike below, or if they were unfortunate enough to miss the spike and die a quick death, they slowly starved in the midst of rotting, putrid corpses. One theory is that some of the remains were those of Scots mercenaries hired by O'Carroll who had them murdered when it came time for payment. Mysteriously, among the bones, workmen also found a pocket watch made
in the 1840's. Could the dungeon still have been in use back then? No-one will ever know.

Over the next seventy years, it remained an empty shell, its fearsome reputation ensuring that the locals shunned it, particularly at night when all manner of ghostly activity was known to stir within its moss clad walls. From across the fields people would watch the window of the “Bloody Chapel” suddenly light up, as though hundreds of flickering candles were blazing within. Some, who dared walk amongst the ruins, experienced alarming encounters with a lustrous lady wearing a billowing red gown.

The Castle has now been restored to its former glory and is now a family home. Do the spirits still wander through the house? Well you’ll have to ask the present occupants.
Posted by SilentOwl at 10:36 AM