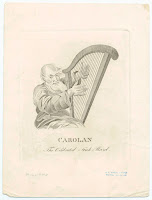 That the Irish could have such a profound effect on Western music should come as no surprise. The Irish were famous, almost legendary, for their love of music as well as their skill as poets. It has even been suggested that they were "intoxicated by the power of words", and there have been incidents when the Catholic Church sought to outlaw Irish bards. The monk Columcille, otherwise known as St. Columba, defended the bardic tradition of Ireland, declaring that poetry was an essential part of Irish life, and that Ireland would not be Ireland without it. So important was poetry and music that Irish history, genealogy, law codes, and medical traditions were composed in verse and set to music.

While the term bard has in modern culture a general connotation of a singer and storyteller, among the ancient Celts a bard was a poet, especially a lyrical poet, something like a modern balladeer. Yet while their primary function was entertainment, they were no mere song-and-dance men (or women), but were counted as one of the three learned groups, along with the druids and the filidh (singular, fili). They served both religious and secular functions, including retelling historical events, genealogies, heroic tales, myths and legends, and composing praise-poetry, wherein they would recite the exploits of the chiefs and kings. However, they also had the reputation of being able to use satire to blight and even kill.

Ancient Irish society recognized four grades of musician poets, of which the bards were the lowest and the filidh were the highest. The novice poet also learned his or her trade in one of numerous schools, where he or she spent at least three years for each grade. Not every poet achieved the highest grade, nor was there any preset period of time in which he or she had to complete the education. However, the filidh tended to make up virtually all the official poets attached to the kings. The reason was because the official poets were concerned with courtly, tribal, and national concerns, and the filidh were trained in at least 350 different poetic metres and epic legends, impromptu composition, and prophecy and divination.

So important was the poet to this aristocratic warrior society that the ollamh, or chief official poet, had a social rank second only to the king. In fact, the ollamh was considered more sacred than the king, and poets were virtually never killed. The Irish had no corporal or capital punishment; instead, a crime was punished by the payment of a dire, or fine, which was based on a person’s honour price, and could range from a fraction of the price to some multiple thereof (Ragan-Legal Tender). The honour price for an ollamh was seven cumhal, or bondmaids (Ragan-Legal Tender), and was worth twenty-one milk-cows, while his or her dire was generally set equal to that of the king.

Poets were generally attached to specific chiefs and kings, and were given stipends of land and cattle to support themselves, but they often journeyed about the land, visiting the strongholds of rulers and nobles, and often staying with them for as much as a year or more. The higher-ranking poets were allowed to have retinues, which usually included lower-rank poets and students. So a fili could have several bards to accompany him, as well as at least one apprentice fili to assist him. An ollamh tended to have the largest retinue, as many as twenty four people, but even a low-ranking fili could have ten. Yet for all their sanctity and reverence, poets could be corrupt, and stories abound of retinues staying until they ate their host out of house and home, and poets extorting rich gifts by the threat of satire.

It is perhaps a measure of the importance of the filidh that, alone of any social group except the kings, they survived the depravations of the English conquerors until the seventeenth century. When Christianity drove the druids underground the filidh took over their roles as teachers, advisors, and witnesses to contracts, and they gradually usurped the important ceremonial roles of the bard, relegating them to the status of mere performers. Though the Irish monks were almost fanatical in their zeal to record the old legends, histories, and genealogies, the filidh were just as responsible for the preservation of the Irish myths, and they began the folk tradition that would make Ireland famous down to the modern age.

Every artistic tradition that is considered to be characteristically Irish, from the seanchaí storyteller and the sean-nós singer, to the Irish tenor and the modern Celtic band, can be traced, directly or indirectly, to the filidh, and through them to the ancient Irish bardic tradition.
Posted by SilentOwl at 3:05 PM

Email ThisBlogThis!Share to TwitterShare to FacebookShare to Pinterest
Labels: Folklore through the Seanachí.