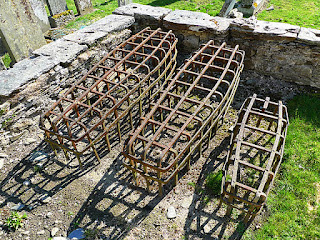 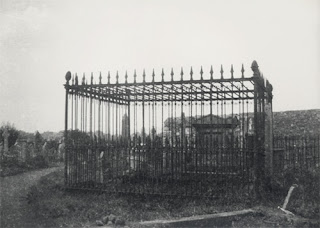 There was a time in Ireland when people feared the nocturnal activities of a group of men that went under the name ‘Resurrection Men’. They specialised in grave robbing and body snatching and were particularly prevalent during the early 1800s. Some of these nefarious characters would be happy just stealing the valuables that had been buried with the dead but some went further, they stole the bodies and sold them to supply doctors who used them in the study of human anatomy.
In order to thwart the activities of these grave robbers people resorted to a number of ingenious measures which included burying bodies in backyards or cellars until the remains were so far gone they were of no use as objects of anatomical research.  People stood guard over recently buried relatives and some people who could afford to erected grills, cages or iron bars around the grave site, these were known as ‘mortsafes’. Mortsafes date from the beginning of the nineteenth century and were designed to protect corpses. They came in a variety of designs and sizes and could be reused after six to eight weeks.

Two of the most notorious grave robbers were Irish and were active in Edinburgh, Scotland during the 1820s.  At the beginning of the eighteenth century Edinburgh had become an important centre for the study of anatomy. Students were assigned one cadaver – usually an executed criminal – on which to practice their studies. However this was not a sufficient amount and gradually students and surgeons began to seek other ways in which to obtain corpses to dissect. Grave robbing was such a common occurrence in Edinburgh at that time that some graveyards had high walls and railings around them and watchtowers were even erected with armed guards standing guard.

William Burke and William Hare were both from Ulster and had gone to Edinburgh to work as ‘navies’ on the New Union Canal.  They worked at this occupation during the day but once night fell they took to their other more sinister and profitable trade.  At first, grave robbing but eventually murder.  Their victims were the homeless who wouldn’t be missed but they soon began targeting drunks and others who they would follow down the dark streets before strangling them.  It was to be another Irish connection that would lead to the eventual end of their gruesome activities.  That connection was a recent arrival to Edinburgh in the shape of Mrs Docherty.  She had recently arrived from Ireland and Burke who met her in a local shop befriended her. He invited her home to his lodgings for a bite to eat and it was there he murdered her. It was believed that Burke and Hare murdered up to thirty people but Burke was the only one prosecuted and then it was for the murder of Mrs Docherty.  Hare turned Kings Evidence against him and Burke was hanged on 28th January 1829.  Hare was reported to have died a penniless pauper in London in 1858.

There is a twist to the story, Burke’s body was donated to medical science for dissection, and his skeleton is still displayed in Edinburgh’s University Medical School. His skin was used to make a pocket book and this is displayed at the Police Museum in Edinburgh.
The Anatomy Act 1832,  allowed the bodies of paupers who died in workhouses to be used for anatomical research, this helped to end the activities of the body snatchers.


Now let us return to the tale of the Irish Resurrection Men.
The fear of being buried alive is as old as the hills.  Famous bards such as Shakespeare and Edgar Allen Poe have written grisly stories regarding it.  Macabre tales of narrow escapes when people who were discovered buried alive when grave robbers opened their coffins.  Contorted, twisted, petrified bodies of those poor unfortunates who upon waking found themselves trapped in a box doomed to a horrific death.  Here follows a story of one such woman who found that being buried alive would become a terrible reality.

Margorie McCall was married to a doctor and they lived in Lurgan, County Armagh.  They were very happy and content with their lot in life. Unfortunately Margorie became ill and although her husband was a doctor he was extremely worried. It should be remembered that in the early 1700s medical science was not what it is today and simple illnesses we would consider as easily cured today could prove fatal at that time. Sadly poor Margorie was to succumb to her fever and she passed away, she was buried in Shankhill Church of Ireland Cemetery not far from where they lived in Church Place.  Her burial was a speedy one for at that time fever was feared as it was known to spread; this should have been the end of the story.

Margorie was buried still wearing a beautiful gold wedding ring.  Her husband could not remove it from her finger due to the fact that her fingers had swollen since her death. People talked of the buried treasure and the Resurrection Men were listening. Here was a chance to make some easy money, not only could they sell the body but they were in for a bonus. That evening, before the ground she was buried in had time to settle upon poor Margorie’s coffin the boys paid a visit.  In the graveyard they worked under cover of darkness, digging down silently until they heard the scrape of the spade upon the lid of her box, they reached down and prised of the lid.

They saw the glitter of gold upon her finger. Realising the story they had heard was true they attempted to remove the ring, it would not budge. Well times were hard and money was as tight as that ring so they decided they were not about to let such a prize go to the surgeon’s slab. She was dead already so she wouldn’t need her finger would she? It was agreed, that they would cut off the finger to free the ring.  Unfortunately for them the shock of the knife slicing through her finger was just what she needed to wake her up from the catatonic state she had been in.  She sat up, eyes wide and screamed like a Banshee. Some say that one of the body snatchers had a heart attack and dropped dead on the spot, others say they took off like the devil himself was after them never to be seen again.  They were even reported as giving up their rather profitable trade.  Margorie rose from her grave and began to stagger to her nearby home
.
Back at the house her husband was sat talking to some relatives that had remain behind after the burial when he heard a bang at the door. He stood up, went to the door and opened it.  There like a scene from The Shining stood his wife (HI Honey I’m Home).  She was still wearing her dirt covered death shroud and she was dripping blood from her part severed finger.  Some stories tell us that he dropped dead from fright and was buried in the plot of ground his wife had recently vacated.  The poor relatives are not mentioned and it’s unsure whether they were pleased to see her alive or upset to see him drop dead.

It is said that Margorie went on to re-marry and to have a number of children.  Some say she was even pregnant when she rose from the grave.  She is still seen wandering the cemetery at night, although you would think she had had enough of that place.  If you visit the graveyard you will see her gravestone, upon it is written “Here Lies Margorie McCall, Lived Once, Buried Twice.

It is also said that some people hide behind the curtains and jump out shouting “it's me, it’s me, it’s Margorie” Now off you go to bed, sweet dreams, and try to Keep Smiling.

This will be the last entry until after my exams. I shall return on the 1st June, until then Keep smiling and look after each other.