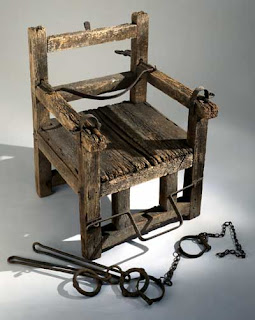 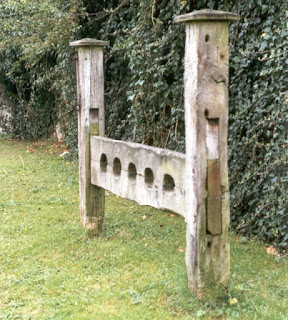 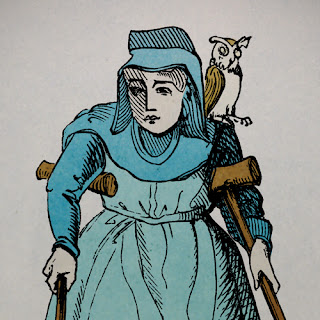 March 31st 1711 was to be the date of the last witch trial in Ireland.  No one was burned at the stake; no one was ducked or drowned.  However eight women were to serve one year in prison and time in the public stocks. Here they were to suffer the indignity of being pelted with rotten fruit and the jeering of their neighbours on market day. Some threw so violently they took at least one woman's eye out.
These eight women became known as the Island Magee Witches as all of them were from that area of County Antrim. They were tried at Carrickfergus court and were found guilty of bewitching a local girl by the name of Mary Dunbar.  It was said that Dunbar suffered fits, trances, and vomiting up household objects.  She was also known to throw bibles while uttering gross profanities.  She blamed all of this on witchcraft and said she had been cursed by those she accused.  The community and local clergy were easily led by this young girl as the women accused fell short of their sanctimonious charges.  They were all poor, some drank (frowned on by the community), some were disabled, and therefore they failed to meet the standards of womanly beauty and female behaviour. They must be witches.  They were an easy target, and it suited the politicians at the time as it was seen by them as furthering their goals.

However, in order to understand the background to the accusations and subsequent trial we need to go back a little further. A series of extraordinary incidents preceded the events that led up to the arrest of the accused. In September 1710, Mrs Anne Haltridge, widow of the Rev. John Haltridge, late Presbyterian minister at Island Magee was staying in the house of her son of the same address.  It was reported that every night she suffered great annoyance from invisible objects that threw stones and sods of turf at her bed. The curtains around her bed opened on their own, pillows were pulled from under her head by unseen hands and the bedclothes were pulled from the bed. Although a thorough search was made of the room nothing was discovered to account for these disturbances. She requested she be moved to another room as she was afraid to remain in that room on her own.

We now move forward to December 11th 1710, surprisingly Mrs Haltridge is still there.  Sitting by the kitchen fire at twilight she is joined by a little boy who sits beside her. He looks as if he is around eleven or twelve years of age, with short black hair, an old hat upon his head, he is wrapped in an old blanket that trails behind him and he wears an old torn vest.  He keeps his face hidden by the blanket.  Mrs Haltridge asked him if he is hungry, where he came from, who he is and so on but to no avail.  Instead of answering her he jumps up, dances around the kitchen, out the door and disappears into the nearby cowshed.  Mrs Haltridge sends the servants to search for him but they can find no trace of him. However, when they return to the house the boy is stood beside them.  Each time they try to catch him they fail. Eventually the boy vanishes and they are not troubled by him again until February 1711.

On the 11th February 1711, Mrs Haltridge, (yes, she is still there), is sat reading her book. She puts the book down for a moment, nobody but her is in the room.  She reaches for her book only to find it missing. The following day the apparition of the young boy reappeared, breaking a window he thrust in his hand with the missing book in it. He told a servant girl that was standing there that he had taken the book and that her mistress would never see it again.  When she asked him if he could read it he replied that he could, and that the devil had taught him. He further stated that within a few days a corpse would leave the house but he refused to name it.

Mr Robert Sinclair, the Presbyterian minister, and two of his elders came to the house and stayed there with the distressed family, spending much of their time in prayer.  Mrs Haltridge went to bed as usual in the haunted room but got very little rest and around midnight a scream was heard.  Mr Sinclair rushed to her room asking what had happened; Mrs Haltridge said she felt as if she had been stabbed in her back with a sharp knife.  Next morning she left the haunted room and went to another but the pain in her back persisted and by the end of the week, on the 22nd February, she died.

Now we come to Mary Dunbar. Around 27th February 1711, a young girl of around eighteen years old came to stay with Mrs Haltridge junior to keep her company after her mother in laws death.  There was already a rumour spreading that Old Mrs Haltridge had been bewitched into her grave and this had a bad effect upon Mrs Haltridge junior.  It was on the night of Mary’s arrival that strange things began to happen. When Mary and another girl retired to their room they found a number of their clothes had been removed from their trunk. When they went looking for the missing items they found them scattered throughout the house.  That night Mary was seized by a violent fit, when she recovered she cried out that she had been stabbed in her thigh and that she had been attacked by three women who she went on to describe. Around midnight she was to suffer a second fit in which she saw a vision of seven or eight women talking together and calling each other by name.

When Mary came out of her fit she gave the names as Janet Liston, Elizabeth Cellor, Kate McCalmont, Janet Carson, Janet Mean, Latimer, and one known as Mrs. Ann. She gave such a good description of the women that even those she did not name were guessed at. All the women were sent for and those she had not named were paired with other ‘innocent’ women, Dunbar then identified each of them as her tormentors. One was even picked out of a group of thirty women.

Between the 3rd and 24th March seven women were arrested, their names were

The accused women were brought to trial on 31st March 1711 at Carrigfergus before judges Upton and McCartney.  Dunbar stated that her tormentors had told her she would be unable to give evidence against them in court and she was reported as being struck dumb the day before the trial, this was to continue through the whole trial.  The accussed had no legal representation and no medical evidence regarding Dunbar was ever given.  Of course they all denied the charges, they even went as far as to take communion and call upon god as their witness.  Judge Upton in his summing up instructed the jury that in his opinion they could not bring in a guilty verdict based upon the evidence of one person’s visions.  He went on to say that there was no doubt in his mind that there appeared to be some diabolical work going on but if the persons accussed were really witches and in league with the devil they would not attend service and partake of communion on such a regular basis. Unfortunately his brother judge on the bench was not so open-minded.  Judge McCartney instructed the jury to find them all guilty. The jury lost no time in doing so.

This ended the last trial for witchcraft in Ireland.  Judge Anthony Upton committed suicide in 1718.

We live in better times yet some people still view the disabled as 'not fitting in'. So we're only one step away.

Lower Image: A disabled woman, did 'not fit in' so she must have been a witch.
Posted by SilentOwl at 10:39 AM