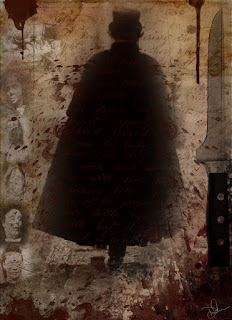 
What is it that makes a series of horrific murders so fascinating for a particular group of people?  They were the first set of murders that caused a media frenzy.  The story went global, it remains unsolved and it is still as popular today as it was over 120 years ago. There have been countless books written about it, television programmes and films made about the events, stage shows and stories.  Yet no one was ever apprehended, no one was convicted, no one ever served a single day in prison, and right up to today the crimes remain unsolved.  There is as much speculation now as there was in 1888-1891 as to who committed these horrific murders.  The question remains "Who was Jack"?
The last to fall victim to the knife of the Ripper was an Irish woman called Mary Kelly but there was another Irish connection.  One of the least likely suspects was a rather dubious character who was called Francis Tumblety (1833-1903) who was thought to have been born in Ireland although he may have been born in Canada.  However, he certainly had Irish parents, James and Margaret and was one of eleven children.  He spent his early years in Rochester, New York and it was there that his rather unsavoury personality was forged.  Neighbours remembered him to be a dirty scruffy boy who was uneducated and always getting into trouble.  By the time he was a teenager Tumblety was working for a shady pharmacist and was also selling pornographic material.  It looks like his life was mapped out.

It’s possible that while working for the pharmacist Tumblety picked up a little knowledge as he began to practice as an “Indian Herb Doctor” or as we call them today “Quacks” selling pseudo cures and ‘snake oil’.  This may also account for his basic knowledge of the anatomy as he had no real medical training although he paraded himself as a doctor.  It is important to point this out as Jack the Ripper was suspected of having some knowledge of anatomy as was shown by the extraction of various organs from his victims.

In 1857, Francis Tumblety was known to have been in Montreal where once again he posed as a doctor.  He was actually arrested for trying to carry out an abortion by administering pills and liquid medication to an unfortunate prostitute, for some reason he was released within a week.  In 1860 he had made his way to St. John where once again he found himself in trouble with the law.  He was questioned regarding the death of one of his ‘patients’ who had died after taking medicine prescribed by Tumblety.  He went on the run to Maine and from there to Boston, all the while making a handsome profit from his medical pretence. This is another important point as some experts believe Jack was a wealthy man.

While in Boston, Tumblety hit on another addition to his deception, he began dressing in pseudo-military uniform and wearing service medals that he certainly had never earned the right to wear.  He began to ride around the streets on a white horse and developed a huge air of self importance and believed himself to be above everyone else.  A trait that Jack was to portray only too well.  He left Boston and began to move around the country, the Civil War saw he arrive in Washington, D.C. where he posed as a surgeon in the Union Army and he impressed all he met with stories of heroism.  He also claimed to have met many famous people including President Abraham Lincoln.  Another point worth considering is that while in Washington it transpired that Tumblety let it be known that he hated women with a passion.  Another link to Jack the Ripper.


Tumblety was reported as calling women nothing better than cattle especially fallen women.  When asked why he had such hatred he replied that he had once been married only to find out later that the woman in question was a prostitute.  What happened to her was never made clear.  At a dinner party given by Tumblety, one of the guests took note of a hideous collection of jars containing human uteruses, each marked by medical condition and category.  They were also marked regarding social class of the people they belonged to.  This was exactly how Jack the Ripper acted.  This does not mean that Tumblety was the Ripper but it certainly sounds suspicious.
Next we head to Missouri. Here Tumblety was arrested twice for wearing medals that he was not entitled to.  He was also arrested in connection with the assassination of Abraham Lincoln (later released), and he was arrested for having homosexual affairs (quite possibly true).  He was also arrested in 1888 in Liverpool, for indecent exposure and indecent assault.  Jack the Ripper committed the first of his known murders in 1888.  Francis Tumblety was arrested on November 12th 1888 concerning the murder (he was a likely suspect in the case at that time).  He was bailed out on November 16th and fled the country eight days later heading to France (the murders stopped).  He returned to New York where the Police arrested him.  However, there was no proof that he had committed any of the Ripper murders so he was released and he then returned to Rochester.  Here he was to live with his sister; he died in 1903 in St. Louis after amassing considerable wealth as a medical quack.

There was never any proof that Tumblety was ever violent against women so all of this is just mere conjecture. In fact in 1888 when the first murder was committed Tumblety was 55, older than anyone described by witnesses at the time.  Homosexual serial killers usually prey on their own sex rather than on women.  However, serial killers are not exactly predictable.  So here we leave the story once again, it won’t be the last time you will read something on Jack, as long as no real evidence surfaces there will always be speculation.  I'll leave you to make your own mind up.