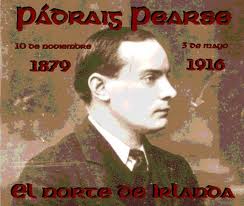 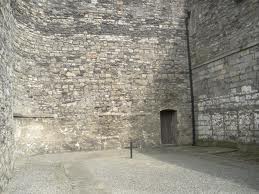 Patrick Henry Pearse (Padraig MacPiarais) is known as an Irish patriot, scholar, teacher and poet. He was a student of literature and history and wanted to free Ireland from the rule of the British. In 1908, he established St. Edna’s College to educate young Irish citizens about Irish customs, language, and beliefs. Pearse was a key figure in organizing the Easter Rising. He had been an active member of the Irish Republican Brotherhood and was named an affiliate of its Supreme Council. He wrote a number of position papers and poems to express his intellectual and emotional feelings about the pursuit of Irish freedom. Perhaps the most memorable of these is “Mise Éire”:

I am Ireland:
I am older than the Old Woman of Beare.
Great my glory:
I that bore Cuchulainn the valiant.

Great my shame:
My own children that sold their mother.
I am Ireland:
I am lonelier than the Old Woman of Beare.

In this poem Pearse describes Ireland’s struggle using familiar themes. He sees Ireland as an old woman who once experienced the glory of having a son who stood against the invader. He was the mythical warrior Cú Chulainn who even when mortally wounded strapped himself to a rock in order to remain standing and continued to fight. However, the old woman also experienced shame as she sees her children sell her to the invaders, a story as old as Ireland herself. Our history is rife with tales of betrayal from within our own ranks.

Pearse hopes to rouse nationalist feelings by drawing on mythology and the concept of Ireland as a defenceless old woman. Pearse, by including her in Mise Eire introduces a feeling of bitterness, something that you see more and more off as you read his poetry but it is also rich in symbolism as he also uses the figure of Cú Chulainn, the archetypal Celtic war hero, as symbolic of the kind of figure that a faltering Irish culture needed to resist the occupying influences, to restore the traditional values of Irish life which Pearse would once again have experienced in Connemara.

Interestingly, the figure of Cú Chulainn was eventually used to commemorate the Easter Rising both in a statute in the Dublin GPO and on the old Irish ten shilling coin (in 1966). Mise Eire is a sad poem, raising as it does many different feelings in the reader. A story of an old mother deserted and sold to Britain who laments her loneliness.

From the cradle to the grave.

There is also a certain irony in Pearse’s life. It is as if An Chailleach Bhéarra, the old hag of mythology has reached out from the mist of time and placed a hand upon his shoulder. Perhaps on Nov. 10, 1879, at 27 Great Brunswick St., Dublin, as the mother and father looked down at their newborn son, they had an idea of what his future held. That may explain why they named him Patrick Henry Pearse. Their son would grow to be the embodiment of the words of the American patriot Patrick Henry, who said in the Virginia Convention on March 23, 1775: "I know not what course others might take, but as for me, give me liberty or give me death!" These words would have been an appropriate epitaph on the gravestone of Pearse, the leader of the Easter Rising 1916. The final irony for Pearse was that his father was a stonemason and Patrick Henry Pearse was to end his life in the stone breakers yard of Kilmainham Prison.

The lower image is of the stone breakers yard where Pardraig Pearse was executed.
Posted by SilentOwl at 4:52 PM