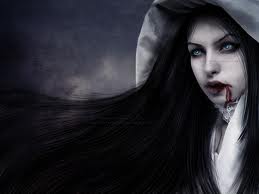 
Once there was a fair maiden named Dearg-due who was so beautiful that she was known throughout the country. She could have married any man that she wanted, but fell in love with a local peasant. This was unacceptable to her father, who forced her into an arranged marriage with a wealthy man to secure the financial future of his family. This new husband treated Dearg-due very badly and she eventually committed suicide although some say it was a broken heart that killed her.

Her burial was a simple affair and she was buried in a small churchyard, supposedly located near Strongbow's Tree, in the village of Waterford. The only one to mourn her death was the young peasant boy who visited her grave everyday tearfully praying for her to return to him. The story tells us that a year after her death she rose from her grave filled with vengeance, she went to the house of her father and finding him asleep she placed her lips over his and sucked the life force out of him. She then went to the house of her husband and in a frenzied attack she not only sucked the breath of life out of him but also his blood. It is said that the surge of blood rushing through her body made her feel alive once more.

It is believed that Dearg-due rises from the grave to seduce men and lure them to their deaths by draining their blood. She is always in the form of a beautiful woman. Legend differs on how often she rises from the grave: some say she returns with every full moon, others a few times a year, while others say she rises but once a year on the anniversary of her death. Most versions of the Dearg-due story claim that she can transform into a bat-like creature, while the other versions make no mention of shapeshifting. Some legends say she does not drink blood, but sucks out the life force from men until they slowly wither and die. All thoughts of her young peasant boy long forgotten and of him we hear no more. The legend of the Dearg-due is born.

According to the legend, the only way to defeat Dearg-due is to pile stones on her grave. While this will not 'kill' her, it will prevent her from rising and hold her at bay. Although sometimes they forget and once more she will roam the night. Some legends say you can only escape if you replace yourself with another victim, thus continuing the circle of death. Some people think that "Dracula" is based upon the Dearg-due, and they argue that Stoker had never travelled to Eastern Europe, so he would only know the beliefs of the areas from travellers. They go on to say that "Dracula" was written during Ireland's great "Celtic Revival". They believe that Stoker took the name "Dracula" from Dreach-Fhoula, pronounced droc'ola, and means "bad or tainted blood" (you will find this on one of my previous posts).

The Du'n Dreach-Fhoula or the Castle of the Blood Visage is supposed to be a fortress guarding the pass in the Magillycuddy reeks in Kerry and it is believed to be inhabited by blood-drinking fairies although it has never been found and even the locals do not know of its location, and even if they do they are not telling.

On the other side of the argument are Irish mythologists who say that the recorded Celtic stories bear no mention of the Dearg-due at all. However, they can't explain the persistence of the oral stories of this Irish vampire. I’ll leave you to decide.
Posted by SilentOwl at 9:02 AM