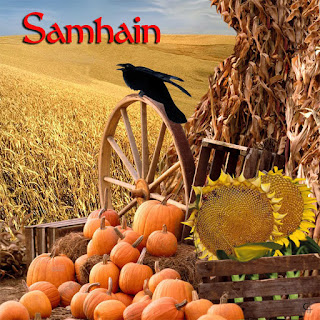 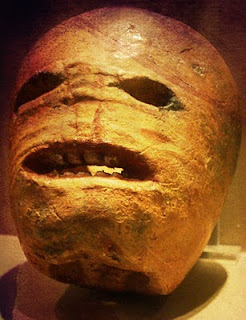 History of Samhain.
Samhain marks one of the two great doorways of the Celtic year, for the Celts divided the year into two seasons: the light and the dark, at Beltane on May 1st and Samhain on November 1st. Some believe that Samhain was the more important festival, marking the beginning of a whole new cycle, just as the Celtic day began at night. For it was understood that in dark silence comes whisperings of new beginnings, the stirring of the seed below the ground. Whereas Beltane welcomes in the summer with joyous celebrations at dawn, the most magically potent time of this festival is November Eve, the night of October 31st, known today of course, as Halloween.

Bobbing for apples was actually a custom the Celts inherited from the Romans when conquered by the Roman Empire. Romans honoured the harvest god, Pomona, and because the apple was a venerated fruit, many rituals revolved around it. The Celts simply incorporated bobbing for apples, a divination game that originated with the Romans, into Samhain tradition.
Or
Bobbing for apples may well represent the remnants of a Pagan “baptism” rite called a seining, according to some writers. The water-filled tub is a latter-day Cauldron of Regeneration, into which the novice’s head is immersed. The fact that the participant in this folk game was usually blindfolded with hands tied behind the back also puts one in mind of a traditional Craft initiation ceremony.
Or
Bobbing for apples was a game of divination. Single girls looking for a mate would carve their initials onto an apple then put it into a bucket of water. Young men would take it in turns to ‘bob’ for an apple, the one they chose had the initials of their intended carved upon it.

The old ways never really die they simply transform. The Samhain fires continued to blaze down the centuries and the customs of the dead are still practiced today within Irish culture. How many times have you seen a long line of black cars following the hearse and it is still considered to be extremely bad luck to break this solemn procession? Shops and businesses will still close their doors and turn off the lights until the dead pass by and the bell of the church sounds its mournful toll. Here in Westport it is our tradition to walk behind the hearse as it does a last lap of the town; we follow the ‘Covie/Donor’ (Westport man/woman) to the edge of town as a last mark of respect. It’s our way of saying “see yer cove”. You visit a cemetery to find offerings of flowers, and candles and it is this communion between living and dead that shows how connected we all are by the true language of spirit.


You can hear Death in the cry of the crow or the screech of the owl, the shadow of Death forever waits within the edge of darkness just beyond the firelight. His touch lightly caressing your shoulder when you think no one is there. His cold breath sending a shiver up your spine, the hairs on your neck stand up. Death is always there, always watching and waiting and his enduring presence is a constant reminder that we all have an appointment to keep and he eagerly waits that time. Death will continue to walk with us, to capture our imagination and to take us by the hand as he leads us on a journey of mystery and wonder to the land beyond the veil. At Samhain bonfires will light up the skies in many parts of Ireland. Whatever the reason, there will probably always be a human need to make fires against the winters dark and these fires will act as beacons guiding our ancestors home. May the blessings of Samhain light up your life.
Posted by SilentOwl at 11:24 AM