THE PRIEST'S SOUL (a story about the first butterfly). 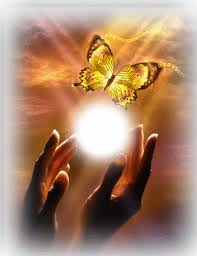 THE PRIEST'S SOUL (a story about the first butterfly)


Once upon a time far back in the mist of time Ireland was known as the land of saints and scholars. Kings and Queens would send their sons here to be educated.

At this time there was a poor young boy who was known to everyone for his intelligence and although his parents were but lowly labourers he came to the attention of one of the priests who taught those of wealth that were sent to him. This is his story.

Now this priest was the cleverest priest in Ireland and he had grown very vain and proud, he had forgotten his own lowly beginnings and even forgotten his god whom his faith had taught him was the one who had made him what he was. His pride of winning every argument led him to believe that he could prove there was no purgatory, no hell, indeed no heaven, and so logically there was no god and no soul. In fact we were no better than the beast of the field and when we died there was no rebirth or resurrection.

“Who ever saw a soul?" he would say. "If you can show me one, I will believe." No one could make any answer to this; and at last they all came to believe that as there was no other world, you might as well do as you liked in this one; the priest set the example, for he took a beautiful young girl as his wife. However, as no priest or bishop in the whole land could be got to marry them, he was obliged to read the service himself. It was a great scandal, yet no one dared to say a word, for all the kings' sons were on his side, and would have slaughtered anyone who tried to prevent his wicked goings-on.

One night an angel appeared to him just as he was going to bed. He told the priest that he had twenty four hours to live.

“Give me more time” said the priest, the angel refused.

“Have pity on my poor soul” said the priest.

“But you have no soul, isn’t that what you have taught others?” replied the angel.

“I have a soul, I can feel it fluttering in my chest ever since you appeared, I was just being a fool before” answered the priest.

“A fool you are” said the angel “What good was all your learning when you forgot your soul?”

“If I am to die will I go to heaven>” asked the priest,

“No, for you denied heaven” replied the angel.

“Well how about purgatory then?”

“No, you denied that as well, so it’s straight to hell for you me boy” said the angel,

“Ah now hang on a minute, didn’t I also deny there was a hell? so you can’t send me there either”.

The angel was a little puzzled.

"Well," said he, "I'll tell you what I can do for you. You may either live now on earth for a hundred years enjoying every pleasure, and then be cast into Hell for ever; or you may die in twenty-four hours in the most horrible torments, and pass through Purgatory, there to remain till the Day of Judgment, if only you can find some one person that believes, and through his belief mercy will be given to you and your soul will be saved."

The priest did not take five minutes to make up his mind. "I will have death in the twenty-four hours," he said, "so that my soul may be saved at last." So the angel gave him directions as to what he was to do, and left him.

Then, immediately, the priest entered the large room where all his scholars and the kings' sons were seated. The priest asked them “Have men souls?” They answered “Once we believed they did but you convinced us otherwise”. The priest replied “I taught you a lie, now I believe there is a god and we do have an immortal soul” they all laughed at him for they thought this was just a trick to start another argument. “Prove it” they said.

“God save you” said the child,

The priest jumped up “Do you believe in God child?”

“The best place and the best teacher is here” said the priest and pointed to himself.

When the priest told the boy his name he said “Aren't you the priest who does not believe in a soul because it cannot be seen?

“I was” replied the priest.

“Well that’s stupid for I can tell you that the soul does exist” said the boy,

“How can you be so sure?” the priest inquired,

“I would say to you show me life if you believe you have life” replied the boy.

“But that is not possible; life cannot be seen for it is invisible”

and the boy replied “So is the soul”.

When the priest heard him speak these words he fell down on his knees before him, now he knew his soul would go to heaven for he had found one who believed and he told the child his whole story.

“Now, take my knife and drive it through my chest and keep stabbing until you see death upon my face, then watch as my soul ascends into heaven. When you see this happen run and tell everyone you see that man has an immortal soul and heaven does exist”

The boy stabbed the priest but he did not die straight away for the angel had said he would live for 24 hours but at last the time came and death settled upon him. The child saw a beautiful living creature with four snow white wings rise up from the middle of the priest’s chest and flutter around his head. He ran and brought back some of those that he met and when they saw it they all knew it was the soul of the priest and they watched in wonder as it passed from sight and disappeared into the clouds.

It is said that this was the first butterfly to be seen in Ireland and now it has entered Irish folklore as the belief that the butterfly is the soul of one who has passed off this mortal coil and is just waiting for the moment the doors of heaven open so they may pass through into eternal peace.

You see sometimes it’s enough to have the simple belief of a child.
Posted by SilentOwl at 7:46 AM