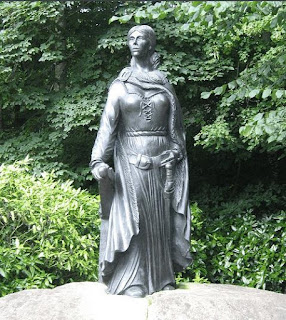 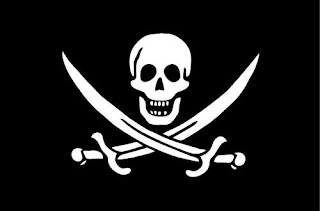 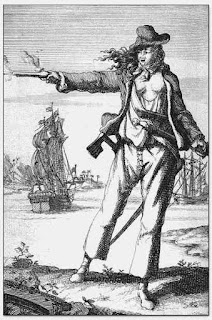 Born in 1530 in County Mayo, possibly she grew up to become a famous and feared pirate, sea trader, and clan chieftain. She was the daughter of Owen O’Malley (Eoghan Dubhdara Ó Máille) and as a young child she always yearned to join her father at sea but he continually discouraged her as the sea was no place for a female. According to legend Gráinne decided to disguise herself by cutting off her long hair, dressing as a boy and boarding her father’s ship. This earned her the nickname of “Gráinne Mhaol”, (Mhaol means bald) so in English that equates to Bald Grace. The nickname stuck and she has been known as Gráinne Mhaol ever since.

The O’Malley clan controlled all the area of Clew Bay and expected taxes to be paid to them by all who sailed or fished the sea around the coast off Mayo and they were generally left alone by the English and Anglo-Irish lords, however, under the rule of the Tudor crown this was to change. The O’Malley had built a line of castles along the west coast and this allowed them to keep an eye on their vast territory both on land and sea. The lord who was in nominal control, Mac William Lochtar Bourke’s (an Anglo-Irish family) left them alone, (by this time the Bourke’s had become more Irish then the Irish themselves and were completely Gallicised).

Gráinne Uí Mháille was educated and could speak in Irish, Scottish Gaelic, English, Latin, French and Spanish. Actually the greater majority of the Irish population spoke more languages and were better educated than those across the water due to the fact that the Irish were forbidden from speaking in Irish and the common person had better access to a basic education. However, as we know that was all to change.

She was to eventually build up a great deal of wealth and this together with her noble Irish blood earned her the title Pirate Queen and she was one of the last Irish rulers of the time to defend against English rule in Ireland. Over her lifetime the English took over most of Ireland piece by piece through a system known as “Sumit and Regrant” they either convinced or forced the Irish clan leaders to surrender their lands and titles to the English crown they would then be given English titles and control of territory, in this way they swore allegiance to the English crown. Some Chieftains submitted, some rebelled, and Grace was one of those who refused the English offer.

At 56 years old, Grace was captured by Sir Richard Bingham, a ruthless Governor appointed by the Queen to rule over the regranted territories. Soon after his appointment, Bingham sent guards to arrest Grace and have her hanged. Grace was apprehended and along with members of her clan, imprisoned and scheduled for execution. Determined to die with dignity, Grace held her head high as she awaited her execution. At the last minute, Grace's son-in-law offered himself as a hostage in exchange for the promise that Grace would never return to her rebellious ways. Bingham released Grace on this promise but was determined to keep her from power and make her suffer for her insurrection. Over the course of time, Bingham was responsible for taking away her cattle, forcing her into poverty, even plotting the murder of her eldest son, Owen.

During this period of Irish rebellion, the Spanish Armada was waging war against the English along the Irish and Scottish coastlines. It is not known whether Grace assisted the English against the Spanish or if she was merely protecting what little she had left-- but around 1588, Grace slaughtered hundreds of Spaniards on the ship of Don Pedro de Mendoza near the castle on Clare Island in Clew Bay. Even into her late 50's, Grace was fierce in battle.

In the early 1590's, Grace was still virtually penniless thanks to the constant efforts of Bingham to keep tight controls on her. There was a rather large rebellion brewing and Bingham feared that Grace would run to the aid of the rebels against the English. He wrote in a letter during this time that Grace was, "a notable traitor and nurse to all rebellions in the province for 40 years."

Grace had written letters to the Queen demanding justice, but received no response. In 1593, her son Theobald and brother Donal-na-Piopa were arrested and thrown into prison. This was the final straw that prompted Grace to stop writing letters and go to London in person to request their release and ask for the Queen's help in regaining the lands and wealth that were rightfully hers.

Grace set sail and managed to avoid the English patrol boats that littered the seas between her homeland and London. The meeting took place in Greenwich Castle. Surprisingly the Queen agreed to a meeting and Grace explained, in fluent Latin, that she was not in fact rebellious in her actions but only that she was acting in self-defence, that her rightful inheritance had been withheld and that it should be returned to her. She also asked for the release of her son and brother and if the queen would agree to this then she would use all her strength and leadership to defend the Queen from her enemies whether on land or sea. Unbelievably the Queen agreed, Bingham was forced to release the two captives but in an act of outright defiance he never restored to Grace her possessions.

There is an interesting story about the meeting of the two Queens,

It is said that during the meeting, Grace sneezed in the presence of the Queen and her lords and ladies. A member of the court, in an act of politeness, handed Grace an attractive and expensive lace handkerchief. She took the delicate cloth and proceeded to blow her nose loudly then tossed the kerchief into a blazing fireplace. The members of the court were aghast that she would be so rude to toss an expensive gift so easily into the fire. The Queen then scolded her and said that the handkerchief was meant as a gift and should have been put into her pocket. Grace replied that the Irish would never put a soiled garment into their pocket and apparently had a higher standard of cleanliness. After a period of uncomfortable silence, (during which the members of the court expected the Queen to have Grace executed for her rude behavior) nervous then roaring laughter followed. It is said that the Queen was amused.

I have written another post on Grainne Uí Mháille, dated Thursday August 26th 2010. If you get time have a look.

Like Gráinne Uí Mháille, Anne Bonny was a strong independent woman, way ahead of her time. Her exact date of birth is unknown but most historians put it to be around 1697 in Kinsale, County Cork, Ireland. She was born into a man’s world, a world where men made all the decisions, women had very few rights and in a time when women did not join a ship’s crew let alone become a respected pirate considered equal by her peers.

She was born the illegitimate daughter of a lawyer, William Cormac and a woman in his employ, Mary Brennan. William’s wife was not very happy when she found out about his adultery so she made it public, this caused him to lose his reputation and so he and his new wife and child decided to leave Ireland to seek their fortune in the New World. They settled in Charleston, South Carolina and here William started a successful legal practice and eventually became a plantation owner.

By the time young Anne had become a teenager she had lost her mother and had to take over the running of the household and care of her father. Stories began to spread about Anne during her teenage years, there was even a suggestion made that she had murdered a servant girl, stabbing her to death. There was also a story that was told about a young man who attempted to force himself on her sexually; she put him in hospital for several weeks.

When she was only sixteen she fell in love with James Bonny, a pirate who wanted to gain control of her father’s estate. Her father despised Bonny and forbid the relationship, this was enough for the rebellious Anne and against her father’s wishes, and she married him. William Cormac was livid; he had wanted her to marry a respectful man not a rogue like Bonny so he turned her out of his home, cutting her off from all financial aid.

James Bonny took his new wife to the pirate’s hideout in New Providence, he found it difficult to support her and in the end in order to make money he became a pirate informer for the governor, Woodes Rogers. When Anne found out about his betrayal she was extremely upset, most of her friends were pirates and so with the help of one of these friends, Pierre, a celebrated homosexual who ran a popular ladies establishment, Anne left her husband. She ran off with Calico Jack Rackam, he was a pirate captain and a great romantic. It was even said he offered to buy Anne from James Bonny, (romantic??).

Now Calico Jack was only a small time pirate and he plied his trade along the Caribbean coast attacking small merchant ships but was not really all that successful. However, he certainly knew how to spend money. He never made his relationship with Anne public knowledge but on board ship everyone knew she was “the captain’s woman”. When Calico Jack found out Anne was pregnant he left her on Cuba to deliver the baby. There is no record of what happened to the baby, some say Anne abandoned the child, some say Calico Jack gave the child away to friends on Cuba and some even suggest that the child died at birth, but we will never know. After a few months Anne returned to Calico Jack’s ship. By now the infamous Mary Read was also on board and it did not take long for the two women to become very good friends, some suggest that their friendship was a lesbian relationship.

In October of 1720, Captain Barnet, an ex-pirate who now commanded a British Navy ship attacked Calico Jack’s ship (the “Revenge”) as it lay at anchor. Almost the entire crew was drunk at the time, celebrating the capture of a Spanish commercial ship, so the fight was a short one and although Mary and Anne resisted they were eventually overpowered and put in chains. The crew of the “Revenge” were taken to Port Royal, there to stand trial. The trial was sensational and everyone was found guilty of the crime of piracy, a crime that carried the death sentence, but Anne and Mary were both spared because they both claimed to be pregnant and a pregnant woman could not be hanged, It is recorded that Mary Read died in a Jamaican prison but the fate of Anne Bonny is unknown. One theory is that Anne Bonny’s father managed to pay a ransom for his daughter’s release and that he took her back to Charleston and that she married a Joseph Burleigh going on to have eight children. It is also said that she died on April 25th, 1782 in South Carolina.

Middle image: The flag of Calico Jack Rackam. This became known as ‘The Skull & Crossbones.

Bottom image: Anne Bonny.
Posted by SilentOwl at 9:17 AM