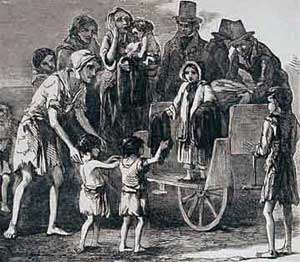 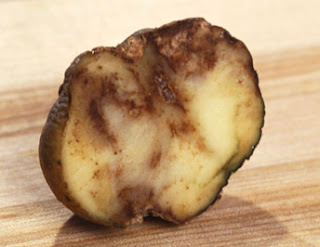 
The potato has been described by some nutritionists as one of the few staple foods that are capable of sustaining life when eaten as a sole diet and for the Irish people life was made possible by this humble tuber. It had been common in Ireland since the seventeenth century and was seen by some foreigners to represent the Irish. Some anti-Irish mobs in England used a potato impaled on a stick as a symbol of the Irish.

It should be remembered though that the potato was only part of the daily diet which also contained milk, buttermilk, eggs, and fish or meat if you were lucky or rich enough to get it. As the population grew so did the pressure on the poor families to put food on the table and from the end of the eighteenth century and into the nineteenth century the potato went from being the most important part of the basic diet to the only food available to the majority of the Irish population. An acre of potatoes could feed a family of six and reports of the time describe how the Irish ate huge quantities, roughly ten pounds a day per person.

In 1845 an unknown disease was to arrive in Ireland, carried on the wind it appeared without warning, a terrible blight. Terror began to spread through the land. The air was laden with a sickly odour of death and decay, it was as if the hand of death had stroked the potato field, and everything growing there was rotten. Only 40% of the crop was to die that year and although it brought great suffering only a relatively small number of people died from famine. However, people ate the food normally sold to pay the rent; they sold their clothing and threw themselves on the charity of the public relief boards. These would prove to be temporary measures at best for everything would depend on next year’s crop.

In the summer of 1846 the bight returned and this time it spread with astonishing speed destroying most of the potato crop throughout Ireland. Less than one fifth of the harvest survived and Death walked the land. From the summer of 1846 on, the blight brought immediate and horrible distress. One historian estimates that between 1.1 and 1.5 million people died of starvation and famine-related diseases, and scenes of unimaginable mass suffering were witnessed: "cowering wretches almost naked in the savage weather, prowling in turnip fields and endeavouring to grub up roots", "famished and ghastly skeletons, such as no words can describe", "little children, their limbs fleshless, their faces bloated, yet wrinkled and of a pale greenish hue". Deaths were highest in south Ulster, west Munster and Connacht, those parts of the country where the population of poorest subsistence farmers and labourers was most dense, but very few areas escaped entirely. All over the country landless labourers died in their tens of thousands, and even shopkeepers, townspeople, and relatively comfortable farmers perished from the effects of the diseases spread by the starving and destitute.

In 1847 very few seed potatoes were sown and it was reported that the harvest that year was only 10% of the 1844 level. This had another effect. The people, encouraged by the relative healthy crop of 1847 mass planted seed potatoes but the blight returned. In 1848 the countryside was said to represent “from sea to sea one mass of unvaried rottenness and decay”. Blight continued to return for the next six years and in 1855 the total harvest was only half that of 1844.

Although the blight itself was unavoidable, its impact on Ireland was magnified by the response of the British government. Blinkered by free-market dogma, and by a profound, almost malevolent, indifference to Irish ills, the government refused to recognize the scale of the disaster or to provide public assistance above the level existing before 1844. Only after the horrors of the winter of 1847, when world opinion made it impossible to ignore the magnitude of the cataclysm occurring in Ireland, were efforts finally made to organize public relief. Even then, these efforts were hampered by slavish adherence to the ideas of the free-marketeers: the poor could not be allowed to become dependent on the state and, above all, the market itself should not be interfered with. As a result, thousands of starving people were put to work, for barely enough to keep them alive from day to day, on projects with no practical value, unnecessary bridges, roads that led from nowhere to nowhere.

Between 1845 and 1850, more than a million Irish people starved to death while massive quantities of food were being exported from our country. Over half a million were evicted from their homes during the famine and a further one and a half million emigrated to America, Australia and Britain, aboard rotting, overcrowded “coffin ships” run by rogue’s and thieves who robbed them of what little they had and rarely supplied the rations of food and drinking water paid for in their ticket. Mostly it was not through choice that these poor people chose to sail; they were forced to leave their little plots of land by unscrupulous landlords who saw them as nothing short of vermin that should be cleansed from the face of the earth.

This is the first of the posts on The Great Famine (An Gorta Mór).

"GIVE ME THREE GRAINS OF CORN, MOTHER.”

It has gnawed like a wolf at my heart, Mother,
A wolf that is fierce for blood;
All the livelong day, and the night beside,
Gnawing for lack of food.

I dreamed of bread in my sleep, Mother,
And the sight was heaven to see;
I awoke with an eager, famishing lip,
But you had no bread for me.

For I read the famine in your cheek,
And in your eyes so wild,
And I felt it in your bony hand,
As you laid it on your child.

A babe that is dying of want, Mother,
As I am dying now,
With a ghastly look in its sunken eye,
And famine upon its brow.

There is many a brave heart here, Mother,
Dying of want and cold,
While only across the Channel, Mother,
Are many that roll in gold?

There are rich and proud men there, Mother,
With wondrous wealth to view,
And the bread they fling to their dogs tonight
Would give life to me and you.

Do the men of England care not, Mother?
The great men and the high,
For the suffering sons of Erin's Isle,
Whether they live or die?

Quick, for I cannot see you, Mother,
My breath is almost gone;
Mother! Dear Mother! Ere I die,

Give me three grains of corn.
Posted by SilentOwl at 8:27 AM