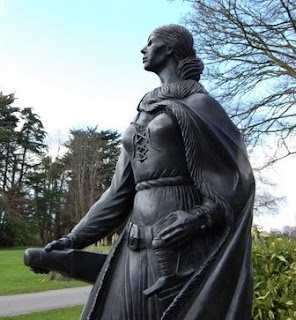 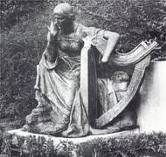 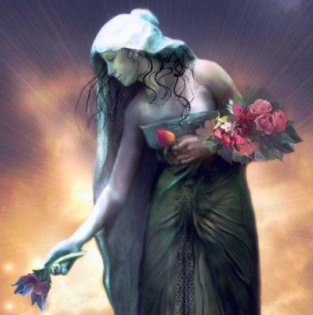 
In many of the pagan world religions the feminine is a dominant presence. The land, the rivers, and mountains in fact all of nature is associated with the Goddesses and other supernatural females. In Ireland it was Ériu who gave her name to our land and she had two sister goddesses called Banba and Fodla. The Trio of goddesses was a common concept within Irish mythology, another trio of goddesses are Morrigan (the Great Queen) goddess of fertility and battle together with her sister goddesses, Badb (“Crow”), and either Macha (also connotes “Crow”) or Nemain (“Frenzy”). The Morrigan frequently appears in the form of a hooded crow. She is one of the Tuatha Dé Danann (“Tribe of the goddess Danu”) and she helped defeat the Firbolg at the First Battle of Mag Tuireadh and the Fomorians at the Second Battle of Mag Tuireadh. The Morrigan also appears as the Washer at the Ford, the Washer is usually to be found washing the clothes of men about to die in battle. In effect, she is choosing who will die.

In the ancient Celtic world Anu was the mother goddess and considered to be the mother of all the gods; the Tuatha de Danann. Other references say that she is the mother earth goddess or the Goddess of fertility. On the Cork Kerry border are two mountains called the Paps of Anu (pap is another word for breast.) On the top of each mountain are stone structures or cairns that when viewed from a distance make the two mountains look like a pair of breasts. Anu was known, in the Celtic World, by several similar names: Danu or Don being the most popular alternatives. She was a Mother-Goddess, the wife of the Sun God, Belenos, and considered to be the ancestor of all the Gods, the Tuatha dé Danann, who found themselves obliged to reside in the Otherworld when Miled brought the Celts to the British Isles. She still looks down on us from the night's sky where she appears as Llys Don, better known as the constellation of Casseopeia.

Aine/Enya: A goddess of cattle possibly related to the mother goddess Danu. Irish goddess of love. Also known as the Faery Queen of Munster, she is aligned with faeries and the magic of the woods. Her name comes from the old Irish word An meaning “bright”. She inspires love and has great powers of fertility and healing. As the Dark Maiden she is vengeful when crossed. The feast of Midsummer is held in her honour. She was originally a Sun goddess who could take the form of a Lair Derg, a red mare that no one could outrun. It is possible that Aine and Grainne alternated as goddesses of the waning and waxing solar year, changing place at the solstices. Aine's father, King Egobagal, is one of the Tuatha de Danann. Also called Aine Marine and Aine of Knockaine, she is associated with Knockainy (Aineis Hill in Munster, and with Dun Aine (Dunany Point) in County Louth. People with the surname O'Corra are said to be her descendants.

Airmed: Irish goddess of healing, herbalists, magic and learning. She is a goddess of the Tuatha Dé Danann, who healed those injured in wars and battles. She collects herbs for health and healing and teaches us about the craft of plant medicine. She also guards the secret wells, springs and rivers of healing and is worshipped as a goddess of Witchcraft and magic.

According to legend, there was once a great and noble god Nuada who ruled the Tuatha De Danann (ancient fairy folk). During a fateful battle, King Nuada lost his arm and was forced to relinquish the throne as a result of the deformity. Airmid’s father and master physician, Dian Cecht, fashioned the fallen king a silver prosthetic arm which enabled Nuada to return as ruler of the land.

Now, Dian Cecht’s son Miach believed that with his own skill as a surgeon and his sister Airmid’s aptitude for regeneration, an even better solution was possible. Together, sister and brother perfectly rebuilt Nuada’s flesh arm in “thrice three days and nights.” When Dian Cecht found out that he had been bested by his own son, he flew into a jealous rage, killing Miach with a fatal blow to the head.

Deeply grieving, Airmid went to her brother’s grave and laid a cairn of stones around the burial plot. Soon after, she discovered new life rising from the earth. Three hundred and sixty-five herbs grew on that spot, each one a cure for a specific part of the body. The goddess spread her cloak and gathered up the herbs according to their properties. But when Dian Cecht learned of this, he overturned the cloak, scattering the herbs to the wind and forever losing the gift that Miach had shared with humankind. Only Airmid has knowledge of the specific herbs in her brother’s offering, and so in times of need we may invoke her spirit for guidance.

The number of the herbs, three hundred sixty-five, is symbolic of the passing of a year; reminding us that time heals all wounds. Despite her pain and frustration, Airmid remained devoted to her ministry as a healer. With Dian Cecht and her remaining brothers, the goddess went on to tend the sacred well of healing. The family recited charms and incantations while the injured and dead were immersed and restored to perfect health and vitality. Wells were believed to be a link between the upper and the lower worlds. Airmid and her family used the well as a way for their tribe to communicate with and draw on the healing forces of the underworld.

We celebrate Goddess Airmid by appreciating nature and the gift of plant medicine. We lend honour to her fate by staying true to the course of our own life’s mission no matter what hardships we may endure. Altars dedicated to the goddess should include herbs of any kind, a piece of cloth to represent her cloak, and a bowl or small cauldron of spring water to symbolize her family’s healing well and the mystical forces that flow throughout all of life.

Badb/Badb Catha: “Raven,” or “Battle Crow,” a goddess of war and sovereignty who could take the form of a raven or wolf. Badb was equivalent to the Gaulish Cathubodua. Her sisters were Macha and the Morrigan, making her a triple goddess. She is sometimes referred to as the Fury and is the Crone aspect of the Triple Goddess. Mainly associated with death and destruction she is also the keeper of the Sacred Cauldron, controlling fate, time, and rebirth.

Banba/Banbha: Irish goddess of protection. The poetic name of Ireland, she protects the land and its people from invaders and forms a triad with her sisters Eriu and Fódla. She also gave her name to the river Barrow.

Be Chuille: Goddess of Druids and Witches.

Boann: The goddess of the river Boyne, which passes Newgrange. Boann was the mother of Aenghus. Also known as a goddess of poetry and spiritual insight. She inspires creativity by clearing the mind and opening the spirit to her. You can invoke her presence near running waters or riverbanks. Mother of the herds and a cow goddess.

Brighid: “Fire Arrow” or “Exalted” goddess of fire, poetry, and smith craft, the daughter of the Dagda. Brighid was one of three sisters, all named Brighid, and was a triple goddess. She is the goddess of the Sacred Flame. Each one of her faces represents her dominion over poetry, healing and smithcraft. She is the keeper of the holy wells and rivers of healing and rebirth as well as the sacred flames of creativity. We celebrate her festival at Imbolc when sacred fires are lit and kept burning all night to encourage the sun to return from hiding. She is the mother of invention and smithcraft and the patroness of priestesses. She is also a patron of other womanly arts – midwifery, dyeing, weaving and brewing, and the guardian of children and farm animals – particularly cows.

Cailleach Bheara (The Cailleach): The great goddess of the moon, sky, and earth. Controller of the seasons and of the weather. In her dark aspect she is a destroyer causing famine, disease, and plagues. Other names are The Veiled One, The Hag, The Crone, and The White Lady. She can turn into a beautiful woman and bestow favours on men who are kind to her.

Cailb: Some people associate this goddess with the Cailleach. She is a death goddess and prophetess. Her mouth was on one side of her head and she had pubic hair down to her knees (not her most attractive attribute).

Canola: Irish goddess of music and dance. She fell asleep to the sound of the wind whispering along the bones of a gutted whale on the beach. When she awoke, she created the Irish harp, an instrument designed to capture the haunting sounds she had heard in her dreams. She is the patroness of musicians and bards. Canola aids inspiration and creativity.

Caer: The wife of Aenghus, Caer possessed the ability to transform into a swan.

Danu: The mother goddess and namesake of the Tuatha Dé Danann or “People of Danu.” Earth goddess of Ireland her name translates as “knowledge”. She is the power and magic of fertile soil, rivers and vegetation.

Eiru, Banba, and Fodhla: Three queens of the Tuatha Dé Danann who aid the Milesians on the condition that their names are given to their home. Eiru is of course Eire, or Ireland, and Banba and Fodhla are often used as poetic titles for the island.

Etain: A shape changing/reincarnating goddess, the wife of Midir. Etain is sometimes related to the Sheela-na-gig icons that dot Ireland.

Flidais: Irish goddess of the woodlands she rides through the forests in a chariot pulled by deer. She is a deity with great sexual powers, seducing male mortals. She is a fertility goddess with many children and supplies nourishment with her cow that can give milk to three hundred people.

Macha: Sister of Badb and the Morrigan, Macha was a sovereignty goddess. Her strong associations with horses make her equivalent to Epona and the Welsh Rhiannon.

Maeve: She is a warrior Goddess of Ireland. She was said to have been worshiped at the ancient mystical site of Tara. Her name is translated to mean "intoxicated woman", as she is associated with intoxication by different substances, such as mead and mind altering herbs. She is also a Goddess of sovereignty, fertility, personal power and of the earth. It is said that the ancient kings of Ireland married the Goddess when they took their place if power. She would bestow her gifts upon them, and they could claim their sovereignty over the land. They would hold great feasts where mead was drunk in her

Morrigan: “Terrible Queen” or “Phantom Queen”; Morrigan is a sovereignty and war goddess, and the lover of Cuchulainn.

Sionainn: Goddess of the Shannon River.

Teamair: Goddess of Tara, daughter of Lugh. Her lover was the goddess Brid.

These are just a few of the Irish goddess’s, there are many more goddess’s throughout the various Celtic pantheon.