The Wolf. Madadh-alluidh (the wild dog) 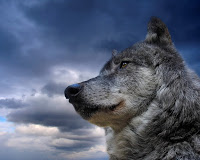 The Wolf. Madadh-alluidh (the wild dog).

The pagan reverence for the wolf and its association with many goddess cults led to a backlash of hostility from patriarchal religious leaders who sought to corrupt the spiritual connection with wolves into something evil and frightening.

Not at all the picture of ferocity or terror, the Wolf is a creature with a high sense of loyalty and strength. Another misconception is that of the “lone wolf.” To the contrary, the Wolf is actually a social creature, friendly, and gregarious with its counterparts. It is a highly sociable animal and many legends tell of the she-wolf nurturing human infants (King Cormac of Ireland, Romulus and Remus of Rome).

The wolf has been extinct in Ireland for centuries and you won’t find much in the way of Irish folklore although it is mentioned in a number of placenames. I have a post (20th August 2010) that tells the story of The Wolves of Ossory. It tells of the people of Ossory who were cursed by a local saint.

Conor-Anglicized form of the Gaelic name Conchobhar which means "dog lover" or "wolf lover". It has been in use in Ireland for centuries and was the name of several Irish kings. It was also borne by the legendary Ulster king Conchobar mac Nessa, known for his tragic desire for Deirdre.

The wolf was a companion of Cernunnos and figures on the cauldron of Gundestrup.

Some people believed that the wolf uses ravens to guide them to food and ravens will follow wolves for the same reason and because of this there is a powerful connection between the two.

As a Celtic symbol, the Wolf was a source of lunar power. Celtic lore states that the Wolf would hunt down the sun and devour it at each dusk so as to allow the power of the moon to come forth. Wolves were a symbol of those who lived close to nature and of courage and bravery. It has been suggested that the Celts cross bred the wolf with hounds in order to create a powerful hunting dog (slaughter hound) that could also be used in battle as a fighting hound.

Wolves remained in Ireland until the last one was killed in 1786. In a short period of time, they went from being plentiful to being hunted to extinction in Ireland. “Mac Tíre” is the Gaelic for wolf which literally translates as “Son of the Land" or “Son of Wolf”.

The Celts used to sit on the pelts of wolves whilst dining and there was a folk belief that the pelt of a wolf could cure epilepsy.

Wolf teeth were rubbed on the gums of babies when teething.

Wolves teeth were considered extremely powerful as a talisman and were worn as charms.

During the middle ages wolves were thought to have magical powers.

It was once believed that if a horse stepped in a wolf print then it would be crippled.

It was also believed that to look into the eyes of a wolf could cause you to go blind.

Some people believed that the wolf sharpened its teeth before it went hunting.

Dead wolves were buried at the entrance to a village and this acted as a deterent to wolf attacks.

People travelling through wooded areas were often wary of wolf attacks (at one time Ireland was covered in forestry). Stone shelters were sometimes built in order to offer some protection and the modern word “loop hole” is derived frop “loup hole” or wolf hole. This was a spyhole in the wall of the shelter from which you could look out for wolves.

There have been many stories written about the wolf and how it has been perceived to be an evil and threatening beast. However, we should also remember that the wolf is the symbol that Baden-Powell used for the Boy Scout movement and he called the children wolf-cubs and the cub-leader Akela after the wolf pack leader in Rudyard Kipling’s Jungle Book.

Just because we do not understand something we should not fear or reject it rather we should try to learn from it and only in that way can we begin to understand its true nature. This is a lesson that we should all learn.
Posted by SilentOwl at 3:48 PM