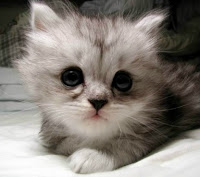 The Cat. Cat in Irish is Cat.

A traditional Irish greeting on entering the house was “God save all here, except the cat” and this was because of its association with evil.

Strangely it was considered lucky if a stray cat was to enter the house.

A cat sat with its back to the fire is a sure sign of bad weather.

A crowing hen, a whistling girl, and a black cat are considered very unlucky. Beware of them in a house.

It was once believed that the bite of a cat was poisonous.

It's a sign of bad luck to meet a magpie, a cat, or a lame woman on a trip. If you meet a rooster at your door and it crows, your trip should be postponed.

In mythology, the cat was believed to have great influence on the weather.

Witches who rode on storms took the form of cats. The dog, an attendant of the storm king Odin, was a symbol of wind. Cats came to symbolise down-pouring rain, and dogs to symbolise strong gusts of wind. This may be where the phrase "it's raining cats and dogs".

Sailors used cats to predict the voyages they were about to embark upon.

Some people believe that cats are able to see the human aura, the energy that surrounds the human body.

It was believed that cats could see spirits or ghosts.

A black cat crossing one's path by moonlight means death in an epidemic.

If a funeral procession encountered a black cat, they believed another member of the family would soon die.

Druids thought black cats were human beings. These were people who had committed indiscretions in a previous life.

It is believed also that if a black cat is killed and a bean placed in the heart, and the animal afterwards buried, the beans that grow from that seed will confer extraordinary power; for if a man places one in his mouth, he will become invisible, and can go anywhere he likes without being seen.

The Druidical or royal cat, the chief monarch of all the cats in Ireland, was endowed with human speech and faculties, and possessed great and singular privileges. "A slender black cat, wearing a chain of silver," is how it was described.

The fear of cats, especially black cats started in Europe during the Middle Ages, especially in England. It was the cat’s independence, wilfulness, stealth and eyes that shone in the dark that seemed to put people on edge. With the explosion of rats at this time came the increase in the cat population and these cats were often fed by poor, lonely old women who were then accused of witchcraft as were the cats (witches familiars).

Some people believed that the cat had supernatural powers and if you looked into their eyes you would be hypnotised.

To kill a cat brings seventeen years of bad luck.

In England and mainland Europe there was a superstition that if a cat was built into a house wall it would protect the house from rats and evil influences. This was a practice that supposedly took place in Dublin.

An ever better protection was the body of a cat and a rat in the wall. The Natural History Museum in London has a collection of some of these unfortunate cats found in walls.

The Cat represents guardianship, detachment and sensuality. The Goddess Brigid had a cat as a companion. Because the cat was associated with the Goddess and the feminine, the cat was sometimes perceived as "unholy". The cat's ability to see and work in the spirit-world makes the cat an ideal ally for a magician. The Church's fear of such powers resulted in the torture and death of thousands of cats in Britain and France. It was in the tenth century when Pope Gregory IX announced a link between the cat and the devil and persecution of the cat became widespread. It has been suggested that this persecution actually contributed to the devastation of the Black Death (bubonic plague) in the twelfth century because of the huge increase in rats. Pope Innocent VIII in the thirteenth century ordered that every cat in Christendom be slaughtered because of their supposed supernatural powers. All because of their association with the Pagan Pantheon.

There once were two cats from Kilkenny
each thought there was one cat too many.
So they fought and they fit
and they scratched and they bit
and instead of two cats, there ain't any!

This poem is about an incident in Kilkenny that occurred in an army barracks in 1798 but there is some dispute concerning it and other stories have been suggested.

The next post will be about the black cat.
Posted by SilentOwl at 3:42 PM