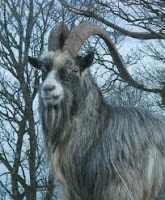 In Irish folklore, a bocánach (goat-like being; goblin) is a goat-like supernatural being or demon who haunted the battlefield and shrieked over the warriors, often associated with the bánánach. Bocánachs shrieked in the air when Cúchulainn fought Ferdia.

The Glaistig, is a water faerie and is part seductive woman, part goat. The goat-like attributes she tries to hide under a long flowing green dress. The Glaistig lures men to dance with her before she feeds, vampire-like, on their blood. Her nature is typically faerie-perverse for she can also be benign and gently tend children or old people. She will also sometimes herd cattle for farmers.

The Glaistig was a solitary supernatural being known in both the Scottish Highlands and Ireland, with the upper half of a woman and the lower half of a goat, although she was also believed to appear in human and animal form. Her skin was grey, and long golden hair fell about her body. Like many of the fairy races she was often seen clothed in green, in the form of a long flowing robe, which covered her goat half.
She frequented the lonely loughs and rivers, and is sometimes describes as a half earth, half water sprite, although her name means literally 'water imp'.

The Glaistig was seen as both benevolent and malevolent towards humans. In one aspect she even takes the role of the Banshee, wailing at the death of important people. She was also thought of as a trickster - throwing stones and leading travellers astray from their paths. The Glaistig was also closely linked to cattle, and in some forms is seen as a herder of domestic cattle, and of wild deer. Libations of milk were poured for her, especially on selected stones(bullaun stones) this veneration may be linked with older fertility customs.

Puck Fair can attribute is roots with Irish folklore and the story of King Puck. The story goes that many years ago Oliver Cromwell's men were moving through and plundering the areas of Kilogonet and Shanara near the base of Kerry's McGillycuddy Reeks. While doing this the men came upon a herd of goats, causing them to flee into the hills. At this time the head male goat "Puck" went on his own in a different direction to the herd making his way towards the town of Killorglin. His distraught appearance in the town gave the residents warning about the coming danger allowing the people to protect themselves. The people were so thankful to Puck for his help that they decided to honour him with a festival and thus Puck Fair was born, being held every year since.

This is just one of the stories that claim to be the origin of Puck Fair. There is no record that gives a precise date or reason for the fair's beginnings. However some evidence of a fair appears as far back as 1603 when King James I granted a fair in Killorglin as legal. Whatever the true reason for the Puck Fair may be it can definitely be said that this is Killorglin's most anticipated yearly event.

Lugh has given his name to the month of August in Irish, Lughnasa (Lúnasa), the month of Lugh, the time of the great pagan festivals in his honour. This is still recalled symbolically today in the festival of Puck Fair in Killorglin in Kerry, where a buck goat, representing fertility, is raised aloft and crowned throughout the duration of the celebrations.

Superstition regards the goat with some caution, partly because of the ancient worship of the god Pan who was half-goat and half-man, and partly because one of the tricks attributed to the Devil is the ability to turn himself into a Goat.

Since ancient times the devil has appeared as a goat with horns and cloven hooves. In England and Scotland it is said that goats will never be seen for 24 consecutive hours because once a day they visit Satan to have their beards combed.

Not all goat folklore is negative and in some cases goats are regarded as beneficial or even lucky. A widespread belief among European farmers was that keeping goats among a herd of cattle would prevent contagious abortion - attributed to the protective nature of the goat’s strong smell. Goats were also kept with horses to keep them content. A tame goat was also used to lead troublesome horses to embark on ships. Similarly, trained ‘Judas’ goats were often used in abattoirs to lead livestock to slaughter.

Goats were also regarded as guardians of treasure - meeting a black goat on a lonely bridle path meant that treasure was hidden nearby. Goats could also be omens of good fortune. It was considered good luck to meet a goat when setting out on an important journey or meeting and in Wales a bride would be granted good luck if the first thing she saw on emerging from church after her wedding was a tethered goat.

Goats' milk can be beneficial for those who are sensitive to other milks and has long been valued for its excellent medicinal and skin enhancing qualities. Irish folklore holds the belief that goats' milk enhances beauty.

A goat's foot or some hairs from his beard are believed to be talismans for driving off evil spirits.

In Ireland it was believed that goats could see the wind and knew when bad weather was coming.

A cure for baldness was to fill a goat’s bladder with human urine, dry it out over a fire, then grind it down and rub into the scalp with raw onions. Presumably the goat was dead (I hope so). How on earth did people come up with these cures?

Goat milk was able to offer some resistance to tuberculosis and was thought to be a cure for eczema.

The Talmud explains that the biblical description of a land "flowing with milk and honey" actually refers to goats foraging in fig trees. The figs were so ripe that sweet juice (called fruit honey) dripped everywhere, and the goats were so well-nourished their udders overflowed with milk. The milk and honey literally spilled across the land.

The Old French word for slaughtering and cutting up meat is boucheron, from the term for a he-goat, bouc. It is also the root of the English words "butcher," "buck" (a male goat), and, perhaps, the slang term "butch."

Goats metabolise and process the yellow-and orange-coloured carotenes found in plants much more efficiently than cows, which is the reason the milk is white, not cream-coloured, and the fat is colourless (a drawback for butter).

In Ireland , one of our oldest traditional instruments the Bodhrán (Bow-Rawn) (a one sided drum), is made from Goatskin and treated by a traditional process. This ancient frame drum is traditionally made with a wooden body and a goat skin head.

The Bodhrán Song (When I Grow Up)


Oh, I am a year old kid, I'm worth scarcely twenty quid,
I'm the kind of beast that you might well look down on.
But my value will increase at the time of my decease,
When I grow up I want to be a bodhran.

If you kill me for my meat, you won't find me very sweet,
Your palate, I'm afraid, I'd soon turn sour on.
But if you do me in for the sake of my thick skin,
You'll find I'll make a tasty little bodhran.

Now my parents, Bill and Nan, they do not approve my plan,
To become a yoke for everyone to pound on.
But sure I would sooner scamper with a bang than with a whimper,
And achieve reincarnation as a bodhran.

I look forward to the day when I leave off eating hay,
And become a drum to entertain a crowd on.
And I'll make my presence felt with each well-delivered belt,
As a fully qualified and licensed bodhran.

And 'tis when I'm killed and cured, my career will be assured,
I'll be a skin you see no scum nor scour on.
But with studs around my rim, I'll be sound in wind and limb,
And I'll make a handy dandy little bodhran.

Oh, my heart with joy expands, when I dream of far off lands,
And consider all the streets that I will sound on.
And I pity my poor Ma, who was never at a fleadh,
Or indulged in foreign travel as a bodhran.

For a hornpipe or a reel, a dead donkey had no feel,
Or a horse or cow or sheep that has its shroud on.
And you can't join in a jig, if you're a former grade A pig,
But you can wallop out the lot if you're a bodhran.

And I don't think that I'll much mind, when I've left meself behind,
Or regret I can no longer turn the power on,
For with my Celtic Inc. design tattooed on my behind,
I can be a very sexy little bodhran.

Now I think I've had enough, of the rubbishy auld guff,
So I'll put a sudden end to this wee ahmran
Quite soon my b-b-bleat, will become a steady beat,
When I start my new existence as a bodhran.
Posted by SilentOwl at 10:02 AM