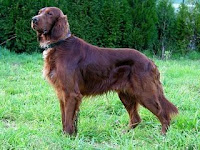 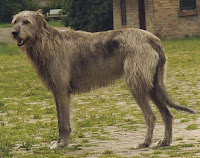 The Dog has not only been man’s closest companion for thousands of years but they have also provided him with many other things. It is probably our oldest domesticated animal and has shared our fires, guarded our homes and worked alongside us both to control livestock and assist in hunting. It has acted as an early alarm system, a reliable food source and even pulled carts. DNA evidence suggests wolves and dogs split into different species around 100,000 years ago; but whether humans had anything to do with that, no one really knows.

The guardianship aspect of dogs in Celtic life is amply illustrated by one of the stories of the early life of Cú Chulainn. In early Ireland the prefix 'Cú' (Hound of) was frequently used in Celtic names of heroes, to denote warrior status. The most famous, Cú Chulainn, which means the Hound of Culann, had a very special and close relationship with dogs. As a young boy, he is called Setanta, but he kills the huge guard dog of Culann the smith and, as a penance, he takes the dog's place and also his name.

This affinity with dogs recurs in the adult life of Cú Chulainn: he has a geis (a bond or taboo) on him that he must never eat hound-flesh. However, he is offered dog meat at a feast, and there is another geis on him never to refuse hospitality. He breaks the first rule and eats the meat; this act weakens the hero's supernatural strength and leads ultimately to his death.

The story is interesting, since it implies that dog meat was a traditional food for the early Celts; this is borne out by the archaeology of Iron Age Europe, where dog remains are part of food refuse on settlement sites. Yet at the same time, dog ritual was very prominent in Britain and Gaul, and there is evidence that dogs fulfilled a special role in Celtic religion.

Dogs were a necessity of life and were highly regarded, the symbol of the dog is commonly found in Celtic art, metalwork and decoration. In Celtic symbolism, dogs are a representation of heroism. They embody heart-pounding attributes such as: Courage, Persistence, and Virility. Dogs were even trained by the ancient Celts to assist in battle. Celtic dogs are also symbolic of healing. They are often associated with Noden, a Celtic god of nutritive waters, hunting and healing (water is often synonymous with healing in Celtic wisdom). Dogs have also been portrayed with Sucellus, the Celtic god of protection and provision (from an agricultural view).

Devoted hounds are often mentioned in Celtic myths, such as Bran and Sceolan which belonged to Finn mac Cumhail. Underworld hounds, such as the Welsh Cwn Annwn belonging to Arawn, are always white with red ears. The Underworld Hounds run down and punish the guilty. Dogs represent tracking skills, the ability to scent a trail, and companionship.

Some superstitions associated with dogs:

The dog was considered good luck by the village. Its companionship drove away loneliness and the signs of illness and rejection that loneliness brings.

The howling of the dog was considered as the first note of the funeral dirge and the signal that the coming of death was near.

A dog howling at night when someone in the house is sick is a bad omen.

It is remarkable that when dogs see spirits (and they are keenly sensitive to spirit influence) they never bark, but only growl.

Howling dogs mean the wind god has summoned death, and the spirits of the dead will be taken.

It was believed that dogs were capable of becoming ghosts after death.

In County Cork it was believed that some food should be thrown out of the room of the dying in order that the death hounds would be drawn away and not take the soul of the dead.

It was believed that dogs could foresee evil.

If you have your new-born baby licked by a dog, your baby will be a quick healer.

Dogs have always been credited with the power of sensing supernatural influences, and seeing ghosts, spirits, faeries or deities which are invisible to human eyes.

Fishermen traditionally regard dogs as unlucky and will not take one out in a boat, or mention the word 'dog' whilst at sea.

The sight of a dog eating grass, rolling on the floor or scratching itself excessively are all said to be omens that rain is imminent.

A black dog was said to be a hag’s (witch’s) father.

Never ask a dog a question for if it answers you will die in the near future.

Dogs were feared as possible carriers of rabies; sometimes even a healthy dog was killed if it had bitten someone, because of the belief that if the dog later developed rabies, even many years afterwards, the bitten person would also be afflicted. Remedies for the bite of a mad dog often included the patient being forced to eat a part of the dog in question, such as its hairs or a piece of its cooked liver.

Dogs were also used to cure other illnesses; one old charm which was often used for healing sick children was to take some of the patient's hairs and feed them to a dog in between slices of bread and butter; the ailment was believed to transfer to the animal, healing the patient.

It is strange that although the dog is so faithful to man, it is never mentioned in the Bible without an expression of contempt; and Moses in his code of laws makes the dog an unclean animal, probably to deter the Israelites from the Egyptian worship of this animal. It was the lowest term of offence--" Is thy servant a dog?" False teachers, persecutors, Gentiles, unholy men, and others sunk in sin and vileness were called dogs; while at the same the strange prophetic power of these animals was universally acknowledged and recognized.

An old Irish folktale about the dog.

Once upon a time the cat and the dog had an argument about who should live inside the house with the humans. After many arguments in which they both put forward their various attributes they still could not decide so they agreed to a race. Whichever one reached the house first would be the winner. The dog was winning the race but stopped when he saw an old beggar he did not recognise and the dogs natural instinct was to attack anyone he did not know. The cat did not stop as we all know cats are only interested in their own comforts and don’t really bother with strangers. The cat reached the house first and the rest is history.

As with a lot of Irish animal superstitions there is mention of a black....
In this case the Black Dog. I will follow this post with one on the Black Dog.