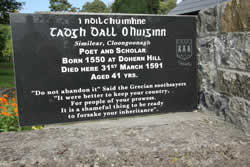 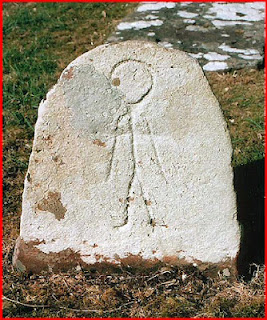 
c1550-c1591.
Tadgh Dall O’Huigínn was a bardic poet and scholar that came from a long line of distinguished Irish poets.  He received his training within his family and may also have received training in the bardic school in Ceall Cluaine (in County Galway) where a number of his family had been trained.  The attachment of ‘Dall’ to his name suggests that he had a visual impairment and he may have been blind in one or both eyes although it has been suggested that he may not have been completely blind.

Tadgh was a wealthy man by today’s standards and he owned land and property throughout Sligo and Mayo that amounted to hundreds of acres and he enjoyed a very comfortable lifestyle.  As a poet of note he was welcomed in all the great houses of Ireland where he spent many weeks being wined and dined by his hosts.  It was the custom in ancient Ireland for the poets to compose poems that spoke of the hospitality and nobility of the nobility, these poems could make or break the reputation of the ruling chieftains so poets were treated extremely well.  The treatment of the bard would then be reflected in what he wrote and the reputation of the chieftain would be enhanced in the eyes of all through the public reading of the poetry or verse.  This made Tadgh an extremely powerful man in the Ireland of his day in much the same way as a highly influential journalist would be considered in the Ireland of today.

However, Tadgh was also said to have a sharp tongue and the gift of satire and it was this that cost him his life. Tadgh was murdered in Banada at Corpus Christi Friary on a Sunday afternoon in 1591.  Tadgh visited Cormac O’Hara of the O’Hara Bui (yellow); he received such a welcome and was treated so well that he wrote a poem that praised the O’Hara Bui to the highest.  The poem became the talk of Connacht and made the O’Hara Bui famous for their prowess in battle, their lineage and genealogy and their magnificent hospitality.

In Connacht there was another branch of the O’Hara.  They were known as O’Hara Rua (Red) and when they heard of this they were extremely displeased.  They were already in contention with O’Huigínn regarding the title to some land and this insult to their line just heightened their intense dislike of him and they decided to seek retribution.  One night, when Tadgh was away on his travels the O’Hara Rua decided to pay a visit to his house.  Six of the O’Hara Rua broke in and stole food and drink before leaving. Tadgh was to return and found his house in a mess that he had to clean up.  This led to great animosity between the O’Hara Rua and the O’Huigínn and the greatest fear the O’Hara Rua had was that O’Huigínn would write a poem ridiculing them for the actions of the six.  In a time when there were no televisions or newspapers the poetry of the bard’s was eagerly awaited by the people and a few well written lines could make you either a hero or a laughing stock and the O’Hara Rua knew that their reputation could be ruined by O’Huigínn.


This is exactly what happened, a poem was written about the six that made them the laughing stock of the countryside, no matter where they went people pointed and sniggered.  At last they could take no more and they decided to kill Tadgh O’Huigínn.  They hatched a plan, they set an ambush and lay in wait for him one Sunday as he was returning home, he managed to escape and fled on horseback to the nearby Friary of Corpus Christi and here he claimed sanctuary believing that this would give him the protection of god’s house.  Unfortunately for Tadgh, the Prior of the Friary was an O’Hara that was related to the O’Hara Rua and he just turned his back on O’Huigínn and refused to help him.  Tadgh was pulled from the Friary and died a horrifying death.  The O’Hara Rua cut out his tongue then slit his throat; they also gave orders that his wife and child were to be murdered at the same time.
The O’Hara Rua responsible for these horrendous acts were eventually captured and taken to Sligo were they were tried for the murders in 1593 but due to the apparent lack of witnesses and evidence they were released.  Tradition suggests that Tadgh Dall O’Huigínn was buried in the grounds of Straide Friary in County Mayo and it is his grave that is marked by the grave marker that shows a carving of a matchstick man.  Is it Tadgh ?  I cannot say for there is no name on the marker so I'll leave it for you to decide.  Keep smiling.


The source used for some of this information was,    As the Waters Flow - Banada Through the Ages by Séan Owens.
Posted by SilentOwl at 10:49 AM