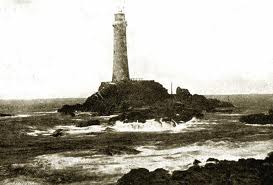 
Lighthouses are lonely places, places of desolation, solitude and danger.  Those who live or sometimes just exist within that environment are trapped by some of the harshest conditions on earth.  Some lighthouse keepers were allowed to be accompanied by their wife and children, sometimes with tragic results as children were swept from the rocks by an unexpected wave, to join other lost souls drowned at sea.  Some keepers were condemned to work with assistants they may not have liked or even grew to hate, for long periods of time.
Can you imagine being trapped in such circumstances, slowly driven mad, the waves crashing up onto the rocks, no access to the mainland for extended periods of time?  None of the modern conveniences that we have today and in cramped dark conditions often damp and uncomfortable, is it any wonder that the spirit of the lighthouse keeper, their families and even those souls that were lost at sea remain behind to haunt the place that was responsible for their unhappiness.
There are many stories that have been told over the years, of jealousy, tragedy and despair. Were they stories based on true events or were they just made up by lonely or bored keepers for their own amusement?  We will never really know.


One such story concerns a lighthouse perched high upon a desolate piece of rock off the west coast of Ireland.  It was almost impossible to get to the island during the long winter months and once there it became your prison until the boat from the mainland arrived in the spring.  The story concerns Fergal O’Malley who was found guilty of poaching by the local magistrate who was also the local landowner.  He was given the option of transportation for life or the job of Keeper of the Lighthouse where he would remain for the rest of his days.  O’Malley chose the latter stupidly believing that it couldn’t be as bad as people made it out to be and as he had recently married he could take the wife with him so he’d have a bit of company.


The following day O’Malley and his young wife were taken by boat to the island, they were allowed to take with them only what they could carry, together with the supplies provide by the landlord.  O’Malley knew his wife would feel lonely on the island so he brought with him a tin whistle for her to play a bit of a tune.  He was unable to read music but his wife was better educated and she was able to read music so he presented her with the whistle and a sheet of music that had upon it just the one tune.  She was delighted and having settled in and lit a fire they began to feel quite happy with themselves and she played her tin whistle much to O’Malley’s delight.
The late summer turned into autumn and the nights grew longer, the weather began to turn and stormy nights kept them imprisoned within the stone walls of the Lighthouse.  O’Malley’s young wife played her tin whistle, over and over again, the same grinding tune slowly driving him insane even when he suggested to her that she played something different she continued to play the same tune over and over again.
Eventually he could take no more, reaching for the axe he used to chop wood for the fire he tore the whistle from her hands and smashed it to pieces.  She screamed in protest and turned upon him in desperation trying to wrench the whistle from him, in a rage he hit her with the axe, again and again to the tune he could hear in his head he brought the axe down upon her.  As his rage began to leave him he realised what he had done but by then it was too late, she lay upon the stone floor her eyes staring up at him as though accusing him in death.  He went up to the lighthouse platform and taking down one of the ropes that hung upon the wall he fashioned a noose, placing it around his neck he stepped over the edge and hung himself.

A couple of days passed and the people of the mainland noticed that the light had gone out and realising something was wrong they went to the local landlord, he ordered that on the first calm day a boat should be sent to the island to find out why O’Malley was failing to carry out his duties.  As they approached the island they saw his partly decomposed body swinging in the wind, inside they found his wife lay where he had killed her.

The Lighthouse is no longer in use, it is now a bird sanctuary and tourists are taken over to the island by arrangement with tour guides on the mainland.  It is said that on quiet nights when the winds are silent if you listen carefully you can hear the sound of a tin whistle playing a soulful tune, or could it just be the sound of far off sea birds?  I’ll let you decide.


My exams are now complete and I await the results sometime around the 17th June.  Thank you for your good wishes.