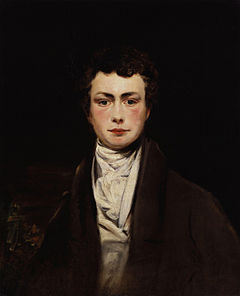 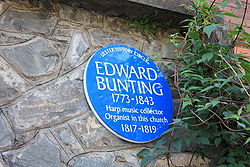 He was an organist employed to notate the music played at the 1792 Belfast Harp Festival. There he lived with the McCracken family and associated with many of the members of the United Irish Society who had initiated the event. The purpose of the festival was to preserve the remnants of the Gaelic harp tradition for posterity. He was so taken with the group he decided to devote a large proportion of his time to the collection and publication of Irish music. In 1792 he toured County Mayo with Richard Kirwan founder of the Royal Irish Academy collecting a number of airs. His first publication appeared in 1796 and contained sixty six tunes (General Collection of the Ancient Irish Music 1796).

Bunting was the first that we know of to gather music from musicians in the field. He planned to include Gaelic text with his music but this was not successful. He provided tunes that lacked authenticity in relation to their original as he was aiming his publications at a particular market, the amateur musicians of the middle and upper classes. In 1809 he published the General Collection of the Ancient Music of Ireland. After 1809 he does not appear to have undertaken any major tour or collection. He spent most of his time working on what he had already collected. His final collection was published in 1840 (The Ancient Music of Ireland). These collections were revolutionary for their time, although later commentators have faulted Bunting's approach to a form of music with which he was unfamiliar. He died on 21st -December-1843 and is buried in Mount St. Jerome cemetery in Dublin.

Several collectors continued and extended Bunting's work during the nineteenth century, with George Petrie's Ancient Music of Ireland (1855); and Patrick Weston Joyce's Ancient Irish Music (1873) and Old Irish Folk Music and Songs (1909) being the most significant.

Moore was born on 28 May 1779 at 12 Aungier Street, Dublin. Moore learned how to play the piano while eaves-dropping on his sister’s lessons. He had a gift for recitation and was frequently called upon by his family to entertain in the home. He was one of the few Catholics to enter Trinity College Dublin where he associated with many of those involved in the 1798 rebellion although he was not involved. He was a friend of Robert Emmet, whom he greatly admired and this consolidated his already nationalistic leanings. Another friendship he made in Trinity was with the collector Edward Hudson, they shared an interest in politics and music. Hudson got many of his airs from harpists and would play them for Moore on the flute.

More moved to London in 1799 where he became endeared to polite society. He was a fine conversationalist and after dinner singer so he was invited to all ‘high quality’ gatherings where he was to make many useful connections. In 1808 he began publishing the first of his Irish Melodies and this proved highly successful both critically and financially. However, by 1819 he was virtually bankrupt. He was a friend of Lord Byron and was appointed his literary executor and wrote his biography (the first of many) upon Byron’s death.

In 1822 he returned to his wife’s home in Wiltshire (he had lived on the continent from 1819-22). Here in his wife’s home he was to spend the rest of his life having survived his five children. He continued to write but eventually stopped due to mental illness and was granted a government pension in 1835.

Irish Melodies appeared between 1808 and 1834 in ten successive volumes and have ensured his place as one of Ireland’s ‘National’ poets. He was often criticised for pandering to the tastes of London society which was far removed from the reality of eighteenth and nineteenth century Ireland.

. An easing of the penal laws against Roman Catholics in 1793 allowed him to enter Trinity College, Dublin, with view to a legal career. A close friend was Robert Emmet, whose death inspired him to write 'O breathe not his name', but Moore stayed aloof from the United Irishmen. Another friend, Edward Hudson, awakened his interest in Irish music, and both were moved by the Irish airs of Edward Bunting.

In 1799, Moore entered the Middle Temple in London. It was his talents as a singer and pianist, however, which made him an immediate favourite of London society; when his translation of the Odes of Anacreon was published in 1800, he was able to dedicate it to the Prince Regent. In 1803, through the influence of Lady Moira, Moore became admiralty registrar in Bermuda, but soon appointed a deputy and returned to London.

In 1808, he published his first volume of Irish Melodies, with music by Sir John Stevenson; the tenth and last appeared in 1843. Many melodies, such as "The last rose of summer" and "Believe me if all those endearing young charms", were love songs, but patriotic ballads such as "The harp that once" and "The minstrel boy" were acceptable to the English as to the Irish. Moore had a regular income from the melodies, in return for his willingness to perform them, but his other writings proved less enduring, even though seven editions of his long oriental poem "Lalla Rookh" (1817) were published within a year.

In 1819, Moore fled to France to escape a debtor's prison after his deputy in Bermuda had stolen £6,000, but was able to return in 1822. He published biographies of Sheridan in 1825, Byron in 1830, and Lord Edward Fitzgerald in 1831, and an unusual novel-cum-history, Memoirs of Captain Rock (1824). His latter years were spent in the village of Sloperton, in Wiltshire where he died on 25 February 1852.

Email ThisBlogThis!Share to TwitterShare to FacebookShare to Pinterest
Labels: Folklore in Traditional Music.