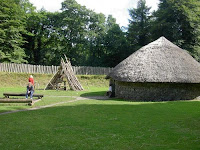 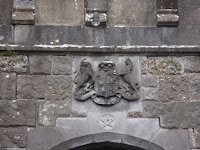 Midsummer Solstice has now passed and we held a small ritual in our circle at home. Ms Owl is now feeling a lot better (stomach upset) and all is well in our world. Our grandson celebrated his fourth birthday, he was born on the 21st-June so a double celebration.

On sunday we went on a day out to Clare and visited Cragganowen - the living past, a depiction of an Iron Age settlement where we saw a Crannog, a selection of Round Houses and a fulacht fiadh (phrase translates as "a pit of the deer" or "the pit of the Fianna," a mythological band of Celtic warriors famed for their heroic feats).

Usually located close to rivers or boggy areas, the pits resemble low, horseshoe-shaped, grassy mounds with a depression at the centre. The hollow area in the middle indicates the location of a wood, clay, or stone-lined pit. The mounds consist of fire-cracked stones that were taken from the pit and scattered around the pit, but with an access path left open. Over time, the stone deposits formed the distinctive pit shape. Radiocarbon dating indicates that the pits were built during the Bronze Age, 4,500 years ago, when we Irish were busy farming cereal crops and rearing cattle.

While the true purpose of the fulacht fiadh remains a mystery, most archaeologists agree that they were used to heat water. This was done by putting fist-size stones on an open fire and then transferring these hot stones into a water-filled trough. This method is actually a very effective way to heat large volumes of water.

We also visited Knappogue Castle I found some of the symbols over the doorways to be of interest. Over one we saw the compass and square of the Freemasons and over another a pentagram.
Posted by SilentOwl at 1:30 PM