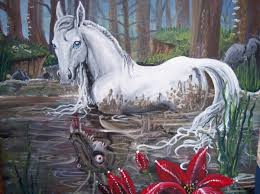 Another story concerning The Kelpie comes to us from Donegal.

Once upon a time, not that long ago, there lived a poor fisherman in the village of Buncranna in County Donegal who went by the name of Seamus O’Doherty. His family had fallen on hard times and he was now the sole provider for his seven brothers and sisters. One day when Seamus was down amidst the rocks at low tide hunting for crabs he stopped for a smoke, it was a fine summer day and finding a sheltered spot behind two large boulders he sat on the warm sand and he let the warm sun warm his body. He lay back and fell into a deep sleep.

Seamus woke with a start, the sun was now low in the sky and the tide was almost full in. “Ah Jesus” he thought ” the tide has cut me off , I’m Stuck!” and indeed he was, it was either swim for it or climb the cliffs, neither was an option he felt inclined to take. He slumped down in his little spot between the boulders and lit another cigarette while he considered his options. Just then he heard the sound of voices, he rose and peered over the rock. Seamus wasn’t very popular in the village as he was prone to bouts of extreme drunkenness so he didn’t expect it to be a rescue party. He was amazed by what he saw coming out of the water. There were a group of people, fair of face and lithe of body, these were no mortal folk, these were Kelpies. Seamus knew the old stories and like most villagers half believed them half not, and yet here in front of him was proof.

When the fairy’s were driven from the land by Patrick and his fellow priests most went to Tir na Og, the land of the forever young but some elected to stay, the Banshee stayed to summon the dying, the shining ones stayed to guard the holy places and the Kelpies took the form of grey seals and lived almost their whole lives in the sea only taking on their human forms to mate or die.

The group of kelpies 7 men and 6 women formed a circle on the beach; they were dressed only in shifts of a light material, covered with a thick cloak of fur. Their leader, if such he was, stood in the centre of the circle and started to sing One by one the others joined in. Such music Seamus had never heard the like of before, it drifted over the beach and mingled with the sound of the waves on the pebbles and the breeze swirling up and down in rhythm with the beat of a heart.

Seamus slid down into his hollow again, this was something no mortal man had seen or heard for thousands of years. The singing got quieter and eventually died away, Seamus rose again and peered over the rock. The group was standing silent, their leader raised his arms and said ‘Go now and make us strong again’ He turned and walked into the sea merging with the surf and was gone. The rest of the group quickly paired off and went to find a place where they could be alone, one couple came towards Seamus,

‘Oh Mother Mary protect me’ prayed Seamus for he had been told of the fate that befell those caught by the fairy’s.

The couple stopped not far from Seamus’s hiding place and throwing their cloaks and shifts to one side began kissing and canoodling on the sand. Seamus could hear the amorous activity increase in intensity and frantically looked round for a means of escape. He then noticed that the girl had thrown her cloak down carelessly and it was just within reach. Seamus edged himself closer and quietly slipped the cloak into his bag, before creeping back to the shelter of the stones.

The couples ended their hanky panky and one by one returned to the sea, the girl whose cloak Seamus had lifted searched the beach for her garment but couldn’t find it. Soon she was alone on the beach.

Seamus rose from his hiding place, ‘Is this what you are looking for?’ he asked taking the cloak from his bag. The girl gasped. “Well have you no tongue in your head?” he asked,

“Seamus O’Doherty” The girl whispered in a strange sing song voice, that seemed to come not from her mouth but from inside Seamus’s Head.

“How in god’s name do you know who I am” asked Seamus,

“Now what would I be doing that for” replied Seamus. ‘Sure you would just be swimming off and leaving me like the poor soul I am. No I want some treasure, gold or silver before you get this back”

“Ha” the girl shook her long blond hair “and how would I do that, isn’t all our treasure deep down in the sea, and you have my cloak so how can I get it?”
Seamus thought about this, the girl smiled and edged towards him hand outstretched, “Please now Seamus give me my cloak”

Seamus looked deep into the girls deep blue eyes, they swirled and sparkled like the pebbles caught in the waves. Seamus reached the cloak out to the girl, then shook himself and said, “None of your auld fairy tricks now”

“Och Seamus” said the girl “sure you’ll give me my cloak now wont you”,

She was close to Seamus now and he could smell the salt in her hair. She reached out and touched him; he felt a tremor run up his arm. She led him down to the water’s edge and reached up and kissed him full on the lips. Stars exploded in his head, his lips tingled and passion flared in every nerve of his body. He pulled her close and returned the kiss. They fell backwards into the shallow water and embraced. She started to sing in his ear in the strange language of the kelpies, Seamus shivered with delight.

He felt a tugging at his waist and in a flash the girl had her cloak and was gone. Seamus was alone and no longer at the water’s edge, he had been pulled out to sea and not noticed. Seamus like many fisher folk then as now couldn’t swim; he floundered for a full minute before at last his head sank beneath the waves. Water rushed into his lungs and slowly he felt life leave his body, as it did he opened his eyes and saw the kelpies male and female surround him and watch in silence as he died.

In the village that evening the Banshee howled and the villagers wondered who had offended the fairy’s, the next morning they had their answer as Seamus’s body was washed into the harbour.
Posted by SilentOwl at 12:10 PM

Email ThisBlogThis!Share to TwitterShare to FacebookShare to Pinterest
Labels: Folklore and Superstition., Storytelling.