The Leannán sidhe and The 27 Club. 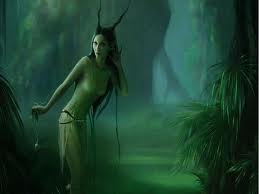 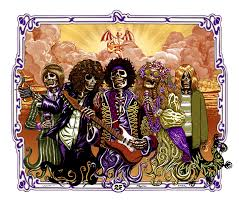 The Leannán sidhe.
Pronounced as Lan-awn shee.
She is known throughout the Celtic world.  The name Leannán sidhe means Fairy of Inspiration or Love Fairy and legend tells us that the Leannán sidhe lives under the Irish Sea.
She is a fairy mistress of dreadful power for she seeks the love of mortal men.  She is said to be evil and dangerous radiating an incredible beauty, under her spell they become her slaves.  Most men cannot refuse her for life without her will seem dull and lifeless and no other woman will ever replace her.
I refer to the Leannán sidhe as her but only because I’m male because she can appear as a male figure of great beauty to a female. The Leannán sidhe is whatever you wish to see.
It appears to take some joy from playing with the emotions of mortals and once you become one with her she is all that matters.  It is often depicted as a vampiric type of spirit that sucks the life force out of its lovers.  All who love her live only for her and they will desire no other frequently destroying themselves or becoming insane as they strive to please her.
In Irish folklore the Leannán sidhe is a muse, a source of artistic beauty, poetry, or music and it’s said that those who devote themselves to it will live a short but glorious life.  It has been suggested that she will give the gift of creativity in exchange for the artist’s life or some would say soul.  To be fair though, it may be the destructive nature of the artist’s life that causes their death. Musicians, artists, writers, and poets often tend to burn the candle at both ends.  Sometimes they may burn brightly but they will also expire quickly. As they say, “Live fast, burn bright, die young”.  However, you’ll be pleased to know that Storytellers are exempt as we realise what she is.
Some artists fall into deep depression when the Leannán sidhe withdraws her love and this usually results in great heartbreak and sorrow. This is the price that must be paid for her inspiration.  She is an impatient mistress who creates such a desire in her lovers that they will overcome all obstacles to embrace her; even life itself is not too high a price to pay.
The more you desire her, the more she will elude you however, you are chained to her and you will never be free. She will never give herself to you in a mortal land and she will insist that she will only meet you in Tir na nOg, so you must pass through death to be with her.
No one knows what she truly is; the translation of her name may hold a clue. The words refer to a fairy muse; Leannán means the love of my soul or spirit...my inspiration if you like.  Sidhe refers to the mounds; it is often used by some people to describe the people of the mounds or the fairies.  In Irish poetic tradition she was the muse who appeared to the bard as the Aishling or Vision.  In his vision he meets her on a hillside and she inspires him to write music and poetry that has an otherworldly sadness and regret for the glories of Irelands past.  A tradition that is carried on and reflected in many of the songs sung by Irish people the world over.
Whatever you think of the Leannán sidhe, whether you regard it as something to be feared or something to be embraced.  Once captured you live only to please.  Like the members of what’s called ‘The 27 Club’ your own passion will lead you to your eventual destruction, usually before you reach the age of thirty, hence the name ‘The 27 Club’.  You become caught within the arms of a dominatrix.  The more you suffer, the more you crave.  The more you feed the craving the more you will hunger and that hunger will never be satisfied.  You will sacrifice everything and become consumed by your own passion.
Extract from the Song of the Leannán sidhe.
You shall be known by other men
For your great works of voice and pen
Yet inspiration has a cost
For with me know your soul is lost
I’ll take your passion and your skill
I’ll take your young life quicker still
Brenna Gwyn of The Children of Twilight.

Posted by SilentOwl at 1:51 AM

Email ThisBlogThis!Share to TwitterShare to FacebookShare to Pinterest
Labels: Folklore through the Seanachí., Irish Superstition., Storytelling.