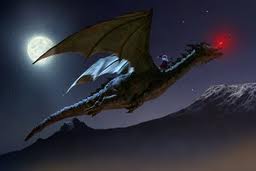 Once upon a time, long, long ago.  High on a mountain there lived a dragon called Eru.  She was a very lonely and sad dragon because she had no friends.  Everyone in the local village was afraid of her but this was only because no one had ever tried to talk to her or get to know her.  Eru would love to make friends and if people would only give her a chance they would soon find out that she was the loveliest, friendliest dragon you could ever hope to meet.

Over the years many knights in shiny armour would climb the mountain hoping to kill Eru but they never managed it.  By the time they got to the top they were far too tired and their armour made so much noise that Eru heard them coming long before they got anyway near the top so she would just fly away and hide somewhere else until the got fed up and went home.

One night when all the people in the village were sleeping a very bad dragon called Shadow flew down on the village and stole some sheep.  In the morning the people woke up to find some of their sheep gone and they became very angry.  Guess who they blamed... Yes you 're right...Poor old Eru. However had they bothered to get to know Eru they would have discovered that she was a strict vegertarian and would never hurt any other animal never mind eat them.

The villagers were screaming and they made so much noise that they woke up Eru who was asleep on top of her nearby mountain.  She flew down to see what all the noise was about but when she saw Shadow she got frightened for she knew just how bad he was.  She was just about to fly away and hide when she saw that Shadow had caught some of the villagers.  Eru became angry, even though the villagers were always trying to hurt her and even sent knights up her mountain to kill her she knew she couldn't let Shadow hurt the villagers and destroy their homes.

Eru flew straight at Shadow, he didn't see her coming and when she hit him he crashed to the earth.  He hit the ground so hard his wings were damaged and the villagers rushed in and finished him off.  Eru landed on the ground,

"Are you alright?" she asked the villagers.

The people of the village didn't know what to do, they were shaking in fright expecting to be eaten at any minute.

"Don't be scared, I wont hurt you" said Eru.

One of the little girls of the village walked forward and said,

"Thank you for saving us, my name is Mary.  You are very beautiful, what is your name?"

"My name is Eru and you are very welcome" said Eru.

All the other villagers introduced themselves and thanked Eru for her help.  Eru became good friends with them and even let the village children ride on her back.  She lived happily and protected the village from harm.  She never felt lonely or sad ever again because now she had loads of friends who had got to know her and found out that she was the kindest dragon you cold ever hope to meet.

So if you ever meet a dragon called Eru be kind to her and you never know she might even let you ride on her back.

Keep smiling, and never judge someone by appearances.

Posted by SilentOwl at 4:34 AM