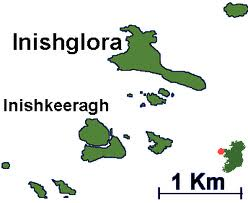 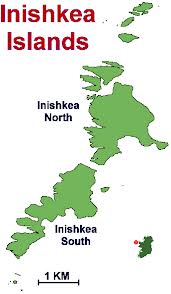 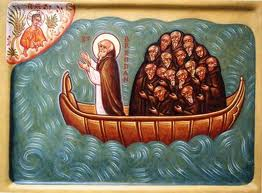 
Off the County Mayo coast, caressed by the waves of the Atlantic Ocean we have a number of beautiful Islands.  The little Island of Inishkea was named after a woman called Kea or Gedia who founded a small community of nuns on the Island.  On this Island there is an inhabitant that is of a different kind, a lonely crane.  From the beginning of time he has been there, perched high on a rock looking out over the sea, he ignores all of the other sea birds and is never visited by any of his own kind.  All life passes him by as if it is but a shadow and still he remains, standing there in solitude and there he will remain, keeping vigil until the end of time.  It was here after flying along the west coast that the Children of Lír met the lonely crane and he asked them “What sort of birds are you that speak with human voices?”, and they told him of the long sad story regarding their enchantment and exile by the wicked witch.  The local people cannot explain the legend, they just accept it.
Nearby is the small Island of Inishglora, it is steeped in legend and superstition.  Folklore suggests that it is upon this Island that the Children of Lír are buried It is said that the end of their enchantment coincided with the arrival of Saint Brendan on Inishglora.  St Brendan had a church built on the Island and every Sunday the swans attended Mass there, sitting on the roof of Teampall na bhFear (Church of the men) and every time the communion host was raised the swans drooped their wings and bent their necks.  It was said that Saint Brendan rewarded their devotion by baptising them whereupon they immediately regained their human form, but only for a few moments before they were to crumble into dust (they were over 900 years old). However, before they turned to dust one of the Children of Lír called Fionnuala gave instructions for their burial.  She asked for a wide grave to be dug near the little church; and the Children of Lír were buried together, as Fionnuala had directed-Conn at her right hand, Ficra at her left, and Aed standing before her face. Saint Brendan raised a grave-mound over them, placing a tombstone on it, with their names engraved in Ogham; after which he uttered a lament for them, and their funeral rites were performed.  Tradition tells us that while the Gaughan family lived on the Island they kept the grave covered with white stones, it is still tended to this day by one of the locals who travels across from the mainland.

There is another great legend that concerns the Island of Inishglora which states that bodies buried there do not corrupt because it is believed that its air and soil had a special power, it preserved the bodies of the dead from decay.  Instead of being buried, the corpses were brought to the island, where they were left lying above ground in the open air. They retained their ordinary looks unchanged, and their nails and hair grew quite naturally; so that a person was able to recognise not only his father and grandfather, but even his ancestors. This is mentioned in the Book of Ballymote as one of the wonders of Ireland and O'Flaherty says of it in his Ogyia ;-

"At Inisglóire in view of lrrus shore,
Should we the bodies of our sires explore,
We'd find them blooming, both nails and hair,
No human-flesh can fade or perish there."13


Of course if you visited the Island today you will not see piles of unburied bodies littering up the place. May be their descendents returned to the Island and buried them but this could have been a missed tourist opportunity (no offence intended).  However, local people claim that the story was true until the monks left the island.
It is also claimed that rats or mice cannot live there and that sand or clay from the island would banish these pests even on the mainland. Gerald of Wales had no doubt about it. He wrote :-


''There is another remarkable thing about this island.While the whole of Ireland is infested with mice, there is not a single mouse here. For no mouse is bred here, nor does one live if it be brought in. if by any chance it is brought in, it makes straight for the nearest point of the sea and throws itself in; if it be prevented, it dies on the spot. ''
There is a less well-known tradition that infertile couples who did a station there were blessed with a family. Having done the station they repaired to a special bed on the island - Leaba na h-Athchuinge. One of the earliest fertility clinics! We are also told that Inishglora is frequented by a curious blackbird, whose only other habitation in Ireland is Sceilg Mhicíl.


No one lives on the Island today but there you will find the ruins of old buildings, there are fragments of two churches Teampall na bhFear (Church of the men) and Teampall na mBan (Church of the women). There are some beehive huts where the monks would have lived although these may predate Christianity and may just have been recycled by the monks?  There is a well,, known as Saint Brendan’s well with steps leading down to it.  This well has its own superstition, it states that if a woman takes water from the well it will turn to blood and it will be full of worms, this has been put to the test and has been found to be untrue.  Could this superstition be based on some practical reasons?  It may have something to do with lonely monks going down the steps into a lonely dark place and meeting a lonely nun fetching water, of course we all know what can happen then don’t we, IT WAS THE WATERS FAULT. So there you have it, the women had to be kept away from the well. You will still find garden herbs introduced by the monks and nuns hundreds of years ago growing wild all over the Island, locals say that the herbs will grow until the end of time. May be they will, who can say.
One last interesting point, it is claimed that in the past all ships sailing by the Island lowered their top-sails to honour Saint Brendan the Navigator who founded the settlement there. So next time you see one of the local boats lowering their sails or sounding their horns you’ll know why.
Posted by SilentOwl at 9:44 AM