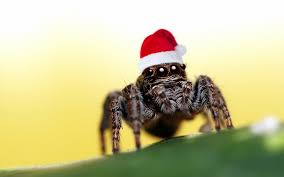 
There was a time when animals were allowed into the house at Christmas, even the milk cow and the family pig, this was said to be because Jesus was born in a stable amongst the animals.  However, housewife’s kept the spiders out because as everyone knows spiders are a bit messy leaving cobwebs all over the place.  It appears no one noticed the cow pats, pig droppings etc.


When Santa arrived on Christmas Eve the spiders were very upset at being excluded and appealed to him for his help. Santa let them in so they could see the Christmas tree and they became so excited that they began to spin webs all over it.  Santa decided that the webs looked so pretty as they glistened in the moonlight he turned them into tinsel, the housewife’s were delighted and from that day onwards spiders have lived with humans.


And that is the story of how we came to have tinsel upon the Christmas tree.
Posted by SilentOwl at 8:58 AM

Email ThisBlogThis!Share to TwitterShare to FacebookShare to Pinterest
Labels: folklore and Christmas.