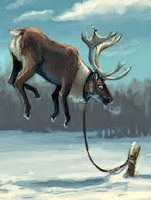 The sacred mushroom was the red and white amanita muscaria mushroom, also known as "fly agaric." These mushrooms are now commonly seen in books of fairy tales, and are usually associated with magic and fairies. This is because they contain potent hallucinogenic compounds, and were used by ancient peoples for insight and transcendental experiences.

Most of the major elements of the modern Christmas celebration, such as Santa Claus, Christmas trees, magical reindeer and the giving of gifts, are originally based upon the traditions surrounding the harvest and consumption of these most sacred mushrooms.

The active ingredients of the amanita mushrooms are not metabolized by the body, and so they remain active in the urine. In fact, it is safer to drink the urine of one who has consumed the mushrooms than to eat the mushrooms directly, as many of the toxic compounds are processed and eliminated on the first pass through the body.

It was common practice among the shaman of ancient people such as the Sami of Finland, and the people of Siberia, to recycle the potent effects of the mushroom by drinking each other's urine. The amanita's ingredients can remain potent even after six passes through the human body. Some scholars argue that this is the origin of the phrase "to get pissed," as this urine-drinking activity preceded alcohol by thousands of years.

Reindeer were the sacred animals of these semi-nomadic people, as the reindeer provided food, shelter, clothing and other necessities. Reindeer are also fond of eating the amanita mushrooms; they will seek them out, and then prance about while under their influence. Often the urine of tripped-out reindeer would be consumed for its psychedelic effects.

This effect goes the other way too, as reindeer also enjoy the urine of a human, especially one who has consumed the mushrooms. In fact, reindeer will seek out human urine to drink, and some tribesmen carry sealskin containers of their own collected urine, which they use to attract stray reindeer back into the herd.

The effects of the amanita mushroom usually include sensations of size distortion and flying. The feeling of flying could account for the legends of flying reindeer.
Santa Claus, super shaman.

Although the modern image of Santa Claus was created at least in part by the advertising department of Coca-Cola, in truth his appearance, clothing, mannerisms and companions all mark him as the reincarnation of these ancient mushroom-gathering shamans.

Originally Santa Claus was not red and white, but was first depicted like this due to a seasonal link to native spiritual traditions involving hallucinogenic red and white mushrooms known as fly agaric. When it was time to go out and harvest the magical mushrooms, the ancient shamans would dress much like Santa, wearing red and white fur-trimmed coats and long black boots.

Later the Coca Cola Company would patent these colours and popularise the now universally accepted colours of Santa’s costume. One of the side effects of eating amanita mushrooms is that the skin and facial features take on a flushed, ruddy glow. This is why Santa is always shown with glowing red cheeks and nose. Even Santa's jolly "Ho, ho, ho!" is the euphoric laugh of one who has indulged in the magic fungus.

The red and white fly agaric mushrooms also played a part in the aboriginal origins of the flying reindeer image that is now popularly associated with Christmas. These mushrooms, or plant teachers, have always been used in rituals involving the sacred reindeer by the shamans of the Sami tribal peoples, who are still practicing traditional lifestyles as nomadic reindeer herders in Norway, Sweden, Finland and Russia today.

The Koryak shamans of Siberian tribes gained notoriety in the grand western narrative of discovery when their winter solstice rituals involving the fly agaric were observed and recorded by anthropologists/adventurers, giving rise to several modern Christmas myths.

At this ceremonial time, the Koryak tribe’s people would work ritually with the mushrooms in their family tents. Their shamans would also work with the mushrooms to reach a non-ordinary state of reality that allowed them to do spirit-walking.
Spirit Walkers Bringing Gifts.

Koryak spirit walkers would visit the tents of their fellow tribesmen on their flying reindeer, the reindeer being a sacred totemic being for Sami tribal peoples. Once there, they would enter the tent through the smoke hole in the roof and distribute more mushrooms as gifts. Then they would exit through the chimney hole and fly away on their reindeer beings once again.

It has been suggested that the egg-nog Christmas tradition was even grounded in these rituals, based on the practice of tribesmen drinking the agaric-spiked urine of the shamans who had ingested the mushrooms, perhaps mixed with egg and spices to disguise the taste. (Makes you think twice about mulled wine, for that matter!).

Clearly, the origins of many western Christmas traditions such as Santa’s elves, Santa coming down the chimney, gift-giving, Santa’s colours, Santa’s home base in the Arctic North, and mistletoe can all be linked to time-honoured indigenous tribal ceremonies and customary practices.

Christmas is as good a time as any to acknowledge the contributions of indigenous peoples around the planet to the formation of global knowledge, culture and innovations since the “age of discovery”. So much of the technology, food, textiles, traditions and even mathematics that formed the basis for modern western civilisation was ‘borrowed’, or synthesised, or developed in conjunction with native peoples.

So spare a thought for the planet’s fourth-world (indigenous) peoples at Christmas time, most of who are excluded from the bounty of first-world colonies built on stolen native lands, resources and knowledge. So many Aboriginal people are even excluded from basic rights like education.

Spare a thought as well that in the ‘first world civilised countries’ (I use that term loosely) every year people spend more money on Christmas presents for their pets than it would cost to educate every third-world and fourth-world person on earth who is currently denied schooling and medical aid. Think about that over your Xmas turkey.


The fly agarics’ religious connections are far reaching. It is widely thought to be the “Soma” talked about in Hindu scriptures, and some also believe it to be the “Amrita” mentioned in Buddhist scriptures. Closer to home, there is a popular myth that Nordic Viking warriors used to consume fly agaric to send them into their berserker rages, although compelling evidence for this theory is hard to find.

Another theory, again difficult to substantiate, suggests that Zulu warriors consumed fly agaric before battle during the Zulu war, and that, in part, this helped them leave the field victorious during the famous “charge of the light brigade”.

In ‘civilised’ Europe its use has given rise to the ‘little people’ such as faeries and leprechauns.

Lewis Carroll was familiar with the affects of Fly agaric, in Alice in Wonderland there is a scene where a caterpillar is sitting on a mushroom (Fly agaric) smoking a pipe. Alice is in front of him at mushroom height and she nibbles on the mushroom to make herself bigger and smaller.

After Alice in Wonderland was published images of the Fly agaric appeared in much of the Victorian literature and it was also painted on children’s toys and cradles. It continues to serve as a classical symbol of enchanted forests and magical groves-the kind of places where fairies, gnomes and all sorts of strange, wonderful and sometimes frightening creatures dwell. Familiar, mysterious and magical.

Fly Agaric is a powerful fungus, whose effects can be extremely variable and dangerous in the hands of those who do not know what they are doing (In Irish we call them Amadán).

Self-experimentation is not recommended. In particular all amanita species with a white or greenish cap should be avoided, as these are definitely very deadly.

The information provided in this article is intended for educational purposes only and should not be used as medical advice. I do not take or share in any responsibility for any events that may occur as a result of self-experimentation.

Have a great Yule, Winter Solstice and Christmas.

Don't forget those who may not be as fortunate as you, especially in this cold weather, be them human or animal we are all part of the wheel.
Posted by SilentOwl at 12:35 PM

Email ThisBlogThis!Share to TwitterShare to FacebookShare to Pinterest
Labels: folklore and Christmas., Folklore through the Seanachí., Present day interest for me., Storytelling.