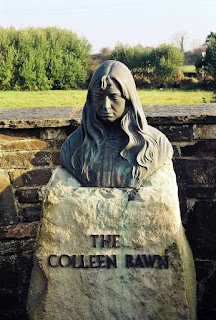 Ellen Hanley. The Colleen Bawn, (1803-1819).
The remains of Ellen Hanley, a young girl of fifteen were found at Kilrush, County Clare.  It was the autumn of 1819 and her body had been washed ashore, she had only been married six weeks and her husband John Scanlan was the prime suspect.  Ellen was known to have been an outstanding beauty, she was intelligent and friendly. Her mother had died when Ellen was only six years old and she was reared by her uncle, John Connery.


John Scanlan was only in his twenties when he met Ellen and he quickly proposed marriage to her.  He was well connected and belonged to a higher social class than Ellen. This difference worried Ellen and she first refused his offer of marriage.  However, Scanlan convinced her that everything would be alright and after calming her fears the marriage was arranged.  Ellen eloped in July, 1819 and it has been suggested that they were married either in Limerick or in the Old Church at Kilrush.


The novelty of marriage to a low born girl was soon to wear off for Scanlan. He became tired of his young bride and with the aid of his servant, Stephen Sullivan; he began to plan her murder.  Sullivan took Ellen for a trip on the river using Scanlan’s boat, he was armed with a gun and he was meant to shoot her and throw her body overboard, however, he lost his nerve and returned to shore.  Scanlan was furious, he plied Sullivan with whiskey and then somehow he convinced Ellen to resume their boat trip.  This time Sullivan murdered her with a musket, removed her garments and ring, hiding them in the boat.  He tied a rock to her body and dumped her remains into the cold dark waters of the Shannon.  Six weeks later her body was washed ashore at Moneypoint, Kilrush on the 6th September 1819. The crime was to raise outrage and horror across all classes.


Scanlan and Sullivan went on the run but even in the early 19th  century the powers of the law had a long reach and Scanlan was the first to be caught. He was charged with the murder of Ellen Hanley and brought to trial in March 1820.  Due to his high social position Scanlan expected to be acquitted for the murder, after all Ellen Hanley was nothing more than a low born commoner. His trial took place and created a sensation in 19th century Ireland, Scanlan’s family hired Daniel O’Connell (the Liberator) to act for him as defence barrister and Scanlan sat back and waited for the verdict of innocent to be declared. He was mistaken, found guilty he was sentenced to death. On the 16th March 1820 he was transported to Gallows Green, County Clare, and the place of execution where he was duly hanged.


Stephen Sullivan was captured soon afterwards and he was tried four months after Scanlan.  His trial took place in Limerick and caused just as much of a sensation as Scanlan’s.  He was found guilty of murder and sentenced to death by hanging, just before the rope went around his neck he confessed his guilt and admitted that it was his employer (Scanlan) who instigated the murder.


Ellen Hanley is buried in Burrane cemetery near Kilrush. A Celtic cross was erected bearing the following inscription:


Unfortunately souvenir hunters have chipped off so much over the years there is now no longer any trace of the cross. So ends the tragic story of the Colleen Bawn (the Fair Girl. If ever you get off the ferry in Killimer pay a visit to her memorial.
Posted by SilentOwl at 1:22 PM